The Atlas Copco Ford Racing team will enjoy the benefit of strong momentum going into the third round of the Donaldson Cross Country Championship on 16 and 17 May.

After securing a clean-sweep of the results and leading the championship following the Toyota Dealer 450 in Mooi River during April, the team will be aiming to continue its impressive form when the series arrives in Malalane for the Nkomazi 450 – a race they won last year. 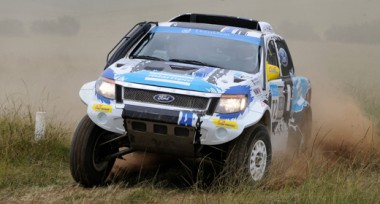 Atlas Copco Ford Racing will continue with the existing driver and co-driver line-up that has powered it to the lead of the Production Vehicle championship, as Manfred Schroder will be retaining his seat for the remainder of the year along with co-driver Japie Badenhorst.

Schroder was initially drafted into the squad as a last minute replacement for Chris Visser who injured his neck on the 2014 Dakar Rally.

“Although Manfred was expected to just compete in one or two events, he has done an exceptional job behind the wheel of the Ranger and notched up a podium and a win in the first two races,” explains Neil Woolridge, Team Manager of Atlas Copco Ford Racing.

“With Chris still recovering from his injury, we’ve decided to stick with the current line-up for the rest of the year and focus on fighting for the championship. It wasn’t an easy decision to make, but it’s in the best interests of the team and the overall title. We have no doubt that Chris will be fully recovered and back in action with us next year.”

Schroder and Badenhorst lead the championship with 40 points, 11 ahead of the Toyota of Leeroy Poulter/Rob Howie, while their team-mates and reigning champions Anthony Taylor/Dennis Murphy are currently third on 25 points. 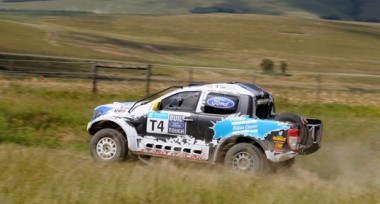 Gary Bertholdt and Siegfried Rousseau will also be heading to Malalane with high expectations after finishing second in the Production Vehicle class at the last race. Aside from getting stuck in a mud hole on the RFS450, the pair has shown impressive pace and consistency in the first two outings and will be hoping for another successful run after finishing second in the last race.

They are currently fourth overall in the standings with 23 points, and will have their sights set displacing the factory Toyotas.

While fighting from the front, Schroder and Badenhorst will undoubtedly also relish the opportunity of lining up alongside their team-mates for the first time in an identical ex-Dakar Ford Ranger featuring the latest specification, including a fully independent suspension.

This is the same vehicle that Visser and Badenhorst used on the Dakar Rally, which was rebuilt and then quickly shipped off to be displayed on the Ford stand at the Geneva Motor Show in Switzerland. It has since been fettled to meet the South African championship specifications.

The race-winning Ranger that powered Schroder/Badenhorst into the championship lead on the Toyota Dealer 450 is the same vehicle that Visser and Badenhorst used for 2013 season and featured the older-spec solid rear axle setup. It has since been sold to an Australian privateer team that will be contesting the Australasian Safari rally which traverses the rugged outback in September.

Round three of the Donaldson Cross Country Championship marks a return to familiar territory for the racing crews. The two opening events of the 2014 season were both new to the championship and extremely rough, so the competitors will certainly be looking forward to a more forgiving event staged on the border of the Kruger National Park in Mpumalanga.

“The Nkomazi 450 is still a fairly new event on the cross country calendar, but we won there last year and it’s a fantastic race,” Woolridge says.  “It’s also quite a tough event, specifically as it’s a long way to travel for our team and it’s usually hot in the Malalane area, but we’re really looking forward to it.”

According to the organisers the route is characterised by sugarcane fields, plantations and open bushveld – and all of the top teams will no doubt be on maximum attack right from the start.

The race is based at Riverview Preparatory School on the outskirts of Malalane, and heads towards the Kaalrug and Jeppe’s Reef areas. There are 12 dedicated spectator areas, with most of the route run in close proximity to the N4 highway. 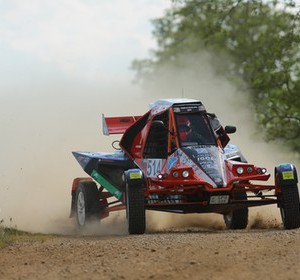 Zoltán Hangodi and Yamaha HQ Buggy stands in 7-8th position after the first day of Riverside Baja. On the opening day of Riverside...
Copyright 2011-2016 Rallyraid.net - RISE Network. All Right Reserved.
Back to top