Everyone a winner at South Africa’s First Namaqua African Rally 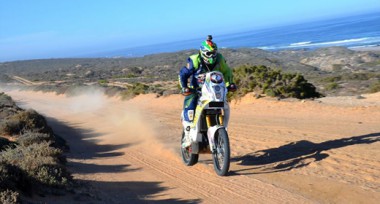 Everyone who participated in the Namaqua African Rally, a multi-stage navigational event for motorcycle and quad riders held over nine days in the Western Cape, is a winner and those who received the chequered flag after racing for five days, are part of a little history made in South Africa.

The 31-year old Brett Cummings from eMalahleni / Witbank in Mpumalanga, a multiple finisher of the Dakar Rally, became the first winner of the Namaqua African Rally after he took the lead on Tuesday (29 April) despite towing his biggest rival, the defending national off-road motorcycle champion, Kenny Gilbert (Proudly Bidvest Yamaha) on the same day when Gilbert ran out of fuel.

The racing action started on Sunday with a 46 kilometre Prologue that determined the starting positions for Monday. The smooth gravel roads suited the quad competitors, who raced after the bikers, perfectly and most bikers, including both Cummings and Gilbert, had to eat their dust on Monday. A combination of racing and organisational issues complicated the day’s results and the defending quad champion, Jurie ‘Botter’ Meyer (Yamaha Race Support) took the lead over from the Prologue winner, Brian Baragwanath (Team Rhide SA Yamaha), who also competed with a quad.

The bikers then made their voices heard and after solid performances – and some bad luck and mechanical problems for a few quad riders – they took the lead after Tuesday’s stage and kept it to the end with Cummings (he claimed two stage victories) claiming the prize money of R100 000 for his victory. Gilbert won three of the racing stages during the event, but lost time when the mousse in the rear tyre  collapsed on Thursday and him running out of fuel. He was still happy with his result and the prize money of R50 000 after his first ever ‘rally raid’ event.

Baragwanath fought an uphill battle after losing the lead on Tuesday. He not only experienced mechanical problems, but he also got lost and had issues with his navigation system and after starting Tuesday behind 40 odd riders, he worked his way back to finish the race as the winner of the quad category and rounding off the overall podium – and claiming R25 000 for his effort. 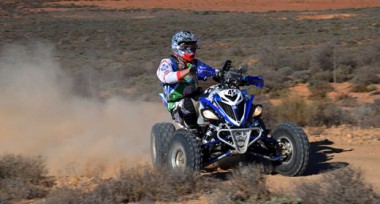 The quad riders stood their man and claimed three of the top seven places with Meyer, who also had his fair share of mechanical issues and towed fellow quad rider, Stefan Swanepoel, for the best part of Friday’s final racing section, finishing fifth overall. Roger Kane-Berman (KTM) who has not participated in a race before, survived a crash or two to finish fourth overall.

Adrian Storm (Automation Products KTM) had a consistent race and was sixth with Swanepoel seventh overall. The Botswana rider, Neil Gailey (KTM) was happy with his eighth place in preparation for his participation in the Australasian Safari later this year. The 2012 Dakar Rally finisher, Greg Raaff (KTM) is also not a regular competitor, but managed a ninth place with Willem du Toit (KTM) rounding off the overall top 10 standings.

Of the 67 competitors who started the race, 54 completed the event. The list of finishers also include competitors who could not reach the finish line on one or more of the days, but who took the ‘bail out’ choice and started the race the next day again. Some of these riders include local Vredendal winemaker, Dewald Huisamen (Namaqua Wines KTM) who experienced tyre problems on Thursday, but raced again on Friday to ensure he is a finisher; quad rider Hannes Saaijman whose Yamaha Raptor engine seized on Tuesday (he rebuilt it during the Rest Day on Wednesday and was ninth fastest on Thursday!); Cape Town quad builder, John Graham (Yamaha) who not only had to fix a problematic engine and also ran out of fuel  reached the finish on Friday and quad rider Paul dos Santos (Factory Racing Suzuki) who experienced gearbox problems also managed to finish. Two of the three Dos Santos brothers from Hoedspruit achieved their goal and completed the event with Tony (50) finishing 40th overall.

The battle between the lady riders continued to the end with Toni Jardine (KTM) winning after a nail biting finish with her bike giving up on her during the last day. She still managed a 17th place overall and won the M1.1 Class (see explanation for classes below). Taye Perry (Bert Smith All Stars Racing Powered by RAD KTM) did not give up the fight and also finished in the top 20 (19th overall) while she won the M1.2 Class.

Both girls recovered from a crash or two during the event and also experienced some niggling mechanical issues – Perry raced many kilometres with bent forks after a crash and experienced tyre problems on the penultimate day while Jardine’s KTM had oil problems – but they persevered to complete their first ‘rally raid’ event and are now aiming for even bigger things.

On four wheels Liezel Barnard (Barnard Vervoer Can-Am) could not finish Thursday’s race due to a broken belt, but she started again on Friday. It was however not meant to be as the propshaft on her big Renegade 4×4 broke. Her husband, Banie, then decided to give up his race in support for his wife who, like the three other ladies, will all compete this coming weekend in the BELL 400 national off-road championship event at Vryheid in KwaZulu-Natal. Chardri Monk (Team Thesens Generators Yamaha) also overcame a few small issues during the race to finish 35th overall.

Also in the overall top 20 was Brian Bontekoning (KTM) who finished 11th overall; Garth Roberts (Roberts Racing Rallye KTM), who was one of the six team-members who started and completed the event – he was 12th overall; the rider from Iceland, Thorarinn Einarsson (KTM) who completed his first ever race in 13th place; Hennie Blignaut (Yamaha) who was 14th overall and fourth in the quad category and Mark Schnaar-Campbell (KTM) who rounded off the top 15.

“We would like to thank every individual, company and organisation who played a role in the success of South Africa’s first Namaqua African Rally,“ the event organiser, George Booker, stated after the event. “Congratulations to Brett Cummings for winning the race. As a double finisher of two Dakar Rally events, he knows all about navigation and he knew how to tackle a multi-stage event and we are proud to have one of South Africa’s international stars winning the race,” Booker said.

“We were honoured to have had so many of SA’s off-road competitors, including champions and former champions, participating while we were glad that many non-competitors and riders of Adventure bikes joined in the fun,” he said. “We would like to thank the community of Vredendal for embracing this event and we look forward to return in a year’s time as we have already started with the planning for the 2015 Namaqua African Rally,” Booker said.

“A special word of thanks to all our sponsors as this event would not have been possible without their support and assistance. Namaqua Wines as the naming sponsor for their hospitality and assistance during the race; Brent Oil as the official fuel supplier for their professional service during the race; Mitsubishi Motors SA  as the official vehicle supplier for the Triton bakkies and Pajero and to Junior Smith Trucking for the transportation of the motorcycles and quads between Johannesburg and the Cape,” Booker concluded. 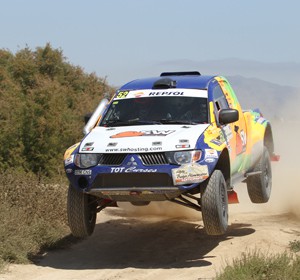 They were in all bets and finally made it, Josep Maria Servia and Fina Roman won the Baja Almanzora. The ninth edition...
Copyright 2011-2016 Rallyraid.net - RISE Network. All Right Reserved.
Back to top