They were in all bets and finally made it, Josep Maria Servia and Fina Roman won the Baja Almanzora. 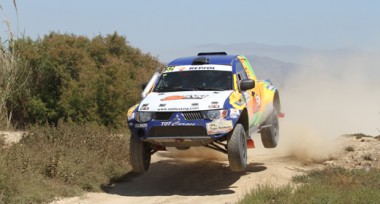 The ninth edition of the Almeria´s race started with a very broad list of candidates for the victory, including the Portuguese Ricardo Leal do Santos who appears in Almeria with Romulo Branco’s Toyota Hilux, Branco was the winner of the first round of the spanish championship.

The race’s road book include 4 stages with a total length of 450 kilometers. The complicate “ramblas” from the area would determine the overall winner at the range of possible candidates to victory. From the first kilometres, Leal made ​​it clear that he had not come to just keep the pace and maintained a good fight with the Mitsubishi L200 of Josep Maria Servia and  Fina Roman. Jose Zaragoza was also in the fight  behind the two experienced Dakar drivers . At the end of the first day of the race after two stages, Ricardo Leal was ahead of Servia in less than a minute. Fina Román, codriver, and wife of Servia was quite clear that the Saturday would be decisive for the result of the race and expressed confidence in its possibilities.

With this minimal difference , the third section starst and Leal and Servia maintained their particular struggle increased both the distance with rivals thanks to  the high power V8 engines of their pick -up.  At the end of the SS3 the Portuguese took the decision to withdraw the race after detecting  problems with the gearbox , which had already been repaired the night before. Without the pressure of Leal, Servia decided to keep the pace instead of control his opponents and finished the 200 kilometres of the last sector increasing its lead with Jose Zaragoza who finished second at half an hour behind the Catalan.

Following the two powerful T1 the third car was a T2, the Toyota Land Cruiser of José Antonio Hinojo and  Xavier Blanco. The second T2 were the team of the Camara brothers, Daniel and Jesus.  While the third place went to the Portuguese team of Alexandre and Rui Franco. 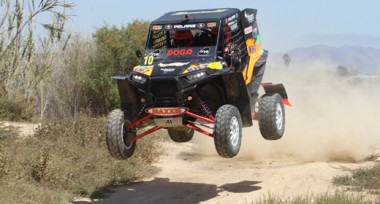 Among the buggies the first place was for Isidre Esteve Pujol (Polaris RZR1000) , please note that this was the race where Isidre suffer the accident which damage the back of the rider, and now, 7 years later he won the race in the buggies category.  Ivan Banaclocha was second and Miguel Valero closed the podium.

Victor Sanchez- Seco was imposed between historical cars with a Toyota Land Cruiser which is the same that the brother of the overall leader, Salvador Servia used in the Dakar – Cairo.

Josep Maria Servia was very happy with the victory. ” The precision of Fina with the road book information is one of the keys in this race where the orientation is very difficult and complicated by the number of crossroads that there are on the track. Fina’s work has been outstanding throughout the race”  Fina Roman added : “I think it has been a very hard and difficult race , we punished the car and the navigation, yesterday, was very difficult in some areas but at the end we managed. Is always a pleasure to race alongside my husband Josep Maria”

Baja Almanzora has become a international race, with entrants from Spain, Portugal, France, United Kingdom, Argentina or Kazakhstan. Andinas Racing start working on the 1oth edition and for sure will be a very interesting event with a lot of facilites for the teams. This year they set up the race HQ, the assistance park, the closed park, the media center inside the Servigroup Marina Playa **** Hotel in Mojacar beach. 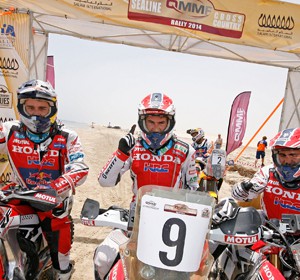 Joan ‘Bang Bang’ Barreda takes the title at the Sealine Cross-Country Rally in Qatar. This is his first triumph in a world...
Copyright 2011-2016 Rallyraid.net - RISE Network. All Right Reserved.
Back to top