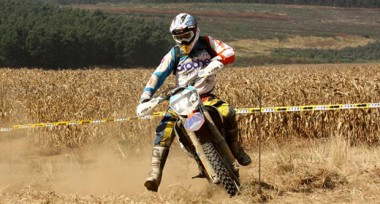 Brother KTM’s Louwrens Mahoney and Ross Branch headed out on the first starting row together with Yamaha’s Kenny Gilbert and Ruan Roberts and it was Branch who took an early lead in the race that nobody could catch up to. The talented rider who turned 28 years the Tuesday before the race gave himself the biggest birthday present and brought home his first ever Offroad victory.

“I can’t explain what it means to me and my team to win my first Offroad race. I’ve been working really hard and changing up a lot of my training and riding style and for me to bring home this first win means that I’m on the right track and I’m looking forward to the races to come. My KTM 450 XC-F was unbelievable, the setup was just perfect and I felt extremely comfortable on it. The route was both fast and tight so it suited my riding style, the organisation and marking was good, I had no problems at all throughout the whole weekend and I couldn’t have done it without my sponsors.”, said a delighted Ross Branch.

Ross Branch is now leading both the overall championship ranking as well as the OR1 championship. His team mate Louwrens Mahoney however was not as fortunate and problems with his gear selector forced the multiple champion to complete the final two laps in sixth gear only, making it hard work for him. He however brought home precious points and thanks to his ‘never give up’ attitude he is now lying second in the OR1 championship behind Branch. A bitter pill to swallow for Mahoney who was on his way to bring home the overall championship, but with three more races to go there is still room for Mahoney to catch up and try and re claim the number one plate. 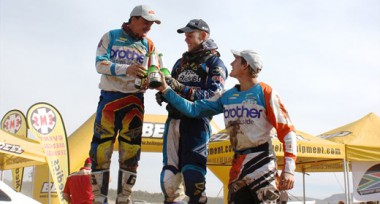 Brother KTM’s Tyron Miller dominated the OR2 class early, unforeseeable problems with his back wheel however saw Miller losing time and therefore the OR2 battle was on between Brother KTM’s Jono van Wyk and Jaycee Nienaber. Van Wyk managed to beat Nienaber, but Nienaber was given time back for stopping with an injured rider and therefore Van Wyk had to settle for second place in the OR2 class for the day. Miller still managed to collect points towards his OR2 championship and is still leading the OR2 class after three rounds.

One man however was the star of the day: Brother KTM’s Louw Schmidt had a phenomenal ride on board his KTM 250 XC-F machine and not just secured his third consecutive OR3 class win, but surprised everyone with a third place overall. The talented youngster from Marble Hall is now lying fourth in the overall championship rankings and is certainly one of the rising stars of the sport.

“I had a bad start and was last in my row, but quickly caught up to the guys in front of me. I passed my team mate Bollie van Rooyen and from there on I rode by myself most of the day with not too much dust in front of me. I enjoyed the race a lot, especially the flowing turns. Some sections were a little too fast for my liking, but I managed to find a good rhythm. The second loop was rockier which suited me more and after I passed my team mate Louwrens Mahoney for third overall I pushed to keep my podium position. I am very happy with my third place overall.”, said Schmidt.

Another hat trick was scored by Brother KTM’s Juan ‘Bollie’ van Rooyen from Port Elizabeth, who seems to dominate the senior class this year. Van Rooyen secured his third consecutive Senior class win and seems to be walking away with the championship. He is leading his class by 17 points and is lying in an impressive fifth place in the overall championship rankings.

“I especially enjoyed the second loop which was a little more technical and suited me and my KTM 300 XC-W. The marking was great and I made sure to slot in where I would not have a dust problem and tried to maintain that position. I am very happy with my result for the day.”, said Van Rooyen.

The fourth round of the South African National Offroad championship will take place in Vryburg (North West) on 14 June. 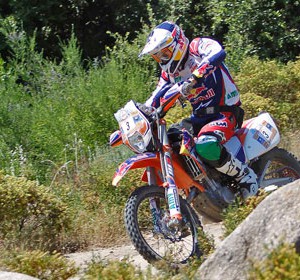 From June, the7th to June the 12th, the "Stars" of the Cross-Country Rally will fight in Sardinia. All the best riders will...
Copyright 2011-2016 Rallyraid.net - RISE Network. All Right Reserved.
Back to top