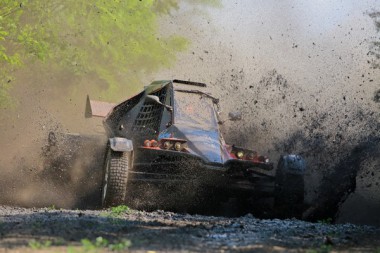 After the Superspecial, Zoltán Hangodi and the Yamaha HQ Buggy occupy the ninth position in the overall classification of Gyulai Várfürdő Cup. Hango’s race was once again poisoned by mud.

It seems like mud keeps holding nasty surprises for Zoltán Hangodi this season: on Friday’s Superspecial a huge puddle (similar to those ruining Hango’s race in the first championship round) caused some headache for the driver of HQ Racing’s Yamaha HQ Buggy. Hango finished ninth in the 6 km warmup but there is no reason for despair: the gaps are really small, he is only 17 seconds behind provisional race leader Antal Fekete. This, keeping in mind that on Saturday nearly drivers have to cover almost 200 km against the clock, is practically nothing.

“There was only one mud puddle on the track, in the woods, but that was really deep and I drove full throttle into it. I thought the cars starting in front of me have already dried it a little, but it was still too deep. As we didn’t know about having mud in the track, we didn’t install the fibreglass cover, so the mud poured into the car. I couldn’t see anything, windscreen wiper had no effect because the windscreen was muddy also on the inside. On the last 1.5 km I was just crawling. Fortunately the gap between me and the leader is still tiny despite this, so the car is good, we can be close to the top positions. Tomorrow we’ll improve!” said Hango.

On Saturday Gyulai Várfürdő Cup continues with four specials on two tracks. On Sunday there will be three more specials, then the teams return to the downtown of Gyula for a prizegiving ceremony. 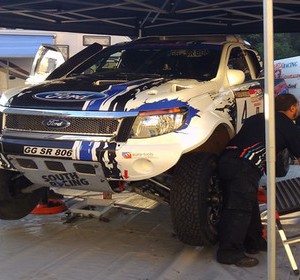 Imre Fodor and Márk Mesterházi finished fifth with their brand new Ford Ranger at the Superspecial of Gyulai Várfürdő...
Copyright 2011-2016 Rallyraid.net - RISE Network. All Right Reserved.
Back to top