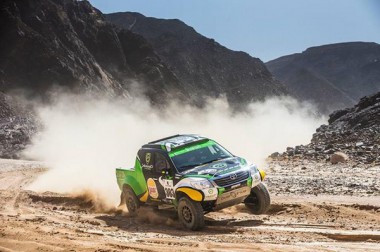 At the helm of an Overdrive Racing Toyota Hilux, Saudi Arabian driver Yazeed Al-Rajhi and German navigator Timo Gottschalk produced a stunning performance to win the six-day Pharoans Rally in Egypt and boost their chances of winning the 2014 FIA World Cup for Cross-Country Rallies.

The Toyota crew began the final selective section of the event that started in El Gouna and finished in Cairo on Saturday, May 24th with a lead of 8min 22sec and held off a fierce challenge from Qatar’s Nasser Saleh Al-Attiyah to seal the win and climb to second in the FIA World Cup standings behind the Russian driver Vladimir Vasilyev after five rounds. 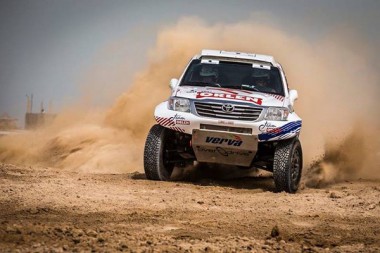 “It has been a fantastic rally and what a result,” said a delighted Al-Rajhi. “My team helped me a lot and Timo did a great job. I don’t have a big experience of cross-country rallying and beating a former Dakar winner in Nasser makes it extra special.”

Polish driver Marek Dabrowski and fellow Polish navigator Jacek Czachor produced a consistent performance in the second of the Overdrive Racing Toyotas and held third overall until they lost three hours on the final stage with a rear drive shaft failure. They still remain in contention for the FIA World Cup title after finishing seventh overall. 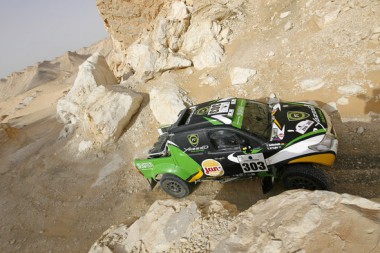 “I am delighted for Yazeed, this was a terrific result for him and one that moved him into a great position to challenge for the FIA World Cup,” said Overdrive team director Jean-Marc Fortin. “It was disappointing for Marek, but that can happen sometimes. I would like to dedicate this famous victory to my mother.”

Teams then headed into the first of the desert selective sections between El Gouna and Luxor last Tuesday. Tricky navigation was part of the ordeal in temperatures exceeding 45 degrees Centigrade and Al-Rajhi kept his cool to win the stage by almost 13 minutes to take the outright lead, once Al-Attiyah made a navigational mistake and passed through an incorrect valley en route to Luxor. Dabrowski completed the stage in seventh position after electrical problems and held a similar position in the overall standings.

“It was a perfect strategy to choose the fifth starting position,” said Al-Rajhi, who beat Vasilyev by 3min 44sec. “We passed Marek and then I made more than 100km in the dist behind Vladimir Vasilyev. Then I managed to overtake him and realised, at the finish that Nasser had not arrived.

The second 362.76km desert selective section headed across the Egyptian desert towards Dakhla and crossed a variety of tracks and small dunes that connect Upper Egypt with the Western Oasis.

Two punctures hampered Al-Rajhi’s progress, but the Saudi retained the lead in the overall standings, despite ceding the stage win to Al-Attiyah. “It was a good day, but it was not easy to open the road,” said Al-Rajhi. “We had two punctures and only two spare wheels and that was worrying. After the first puncture, Vasilyev passed us and we swapped positions five or six times and ended the stage in front of him.”

The route then headed north towards the Libyque desert and crossed sandstone and limestone trails en route to the bivouac in Baharia on Thursday. Al-Rajhi maintained his advantage after finishing second on the special and Dabrowski was fourth to hold third overall.

Held in slightly cooler conditions, the fourth selective section was a loop stage around the Baharia oasis on May 23rd and Al-Rajhi was in superb form to win the stage and beat Al-Attiyah by 43 seconds, with Dabrowski again slotting into fourth position

It meant that the Overdrive Toyota duo began the final stage between Baharia and Cairo in first and third overall. Al-Rajhi would open the road on the final stage with a lead of 8min 22sec. Al-Attiyah attacked from the outset and overtook the Saudi after 50km, but Al-Rajhi drove a measured stage in the Qatari’s dust and shadowed the former champion to the finish to claim a famous win by the margin of 5min 26sec.

Dabrowski lost out on third position when he broke a rear drive shaft and lost three hours and any chance of a podium finish. 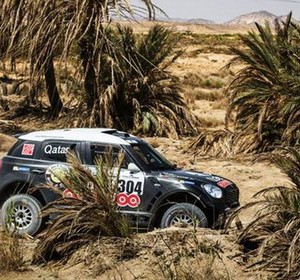