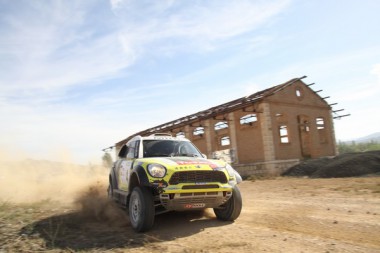 The 31st edition of Baja Aragón brought an exciting battle between Nani Roma and Orlando Terranova – again. In 2013, the Argentinean missed out on the top of the podium by 4 minutes 32 seconds, this year he was much closer to his team mate: the gap at the end of three days of racing was a mere 25 seconds! Behind them, the third place of Martin Kaczmarski and fourth of Vladimir Vasilyev completed the success story of X-raid.

The 31st edition of Baja Aragón once again was hosted by the city of Teruel. After the cancellation of Silk Way Rally, the event attracted lots of top drivers: not fewer than six Minis and a real armada of Toyotas appeared on the entry list, together with some other interesting entries like SouthRacing’s Ford Ranger or Schlesser’s SP01 with Joan Roca. 61 crews were allowed to start in the FIA classification. 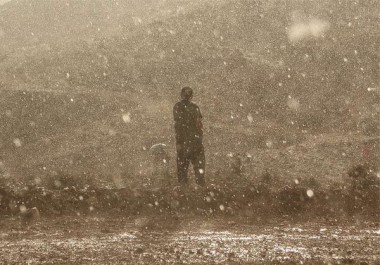 After Thursday’s scrutineering, Friday afternoon engines started to roar at the 6.5km Superspecial. Already before the start of the first cars some thick black clouds gathered above Teruel, but the first ten cars only had problem with the dust. Then it started to rain, making the job of the next few drivers easier by killing dust. And then… then it started raining like cats and dogs, making the rest of the Superspecial looking more like figure skating than cross-country rally. As the teams had no chance to prepare for these circumstances, some cars ended up with much worse results than they could normally have. 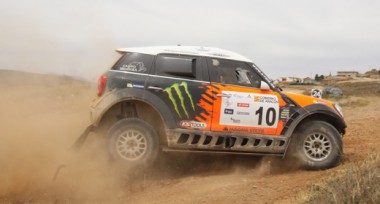 On Saturday’s tracks there was no sign of the rain of the previous day so the cars had to face with their “normal” enemy at Baja Aragón: thick white dust. According to the rules, the first ten was able to choose their starting positions. Al-Rajhi chose to start as first, behind him Zheludov, Varela, Roma, Terranova, Al-Attiyah, Dabrowski, Kaczmarski, Alvarez, Spinelli was the starting order of the top 10.

Opening the track is never easy: there are no traces, the road is dirty and the smallest mistake can result in dropping out of the race. This latter was proved by Yazeed Al-Rajhi, who rolled his Toyota 17 km from the finish of SS1 while he was in the lead and this left him with a slightly re-designed Toyota and more than 20 minutes lost. At SS2 he didn’t start. 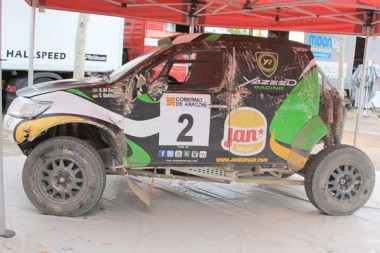 This left the way open for Nani Roma who won SS1. But directly behind the Catalan arrived his “worst nightmare”, rival and teammate Orlando Terranova with whom he fought a fierce battle already in 2013 and now they continued as they left off: Orly was only 33 seconds slower than Nani. Behind then Zheludov finished third as best of the Toyotas.

The second, 217 km special repeated the order in front: Roma won again in front of Terranova, but overall the gap was only 33 second at the end of Leg 2. Behind them, Erik Van Loon grabbed the last podium place from Zheludov. FIA World Cup overall leader Vladimir Vasilyev climbed up from 7th to 5th place. Nasser Al-Attiyah, after having two punctures in SS1, suffered some mechanical problems in SS2 which left him more than 30 minutes behind the leader. 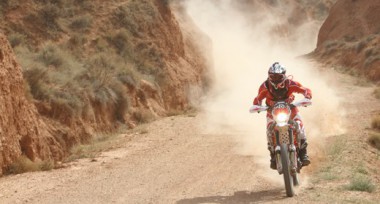 On Sunday the same 116 and 217 km special were on schedule. In front, Nani Roma did his best to keep Terranova behind and was fastest by 1 minute 4 seconds in SS3 so the gap before the last special grew to 1 minute 37 seconds. Zheludov once again proved to be the best of the Toyota squad, 1 minute 46 seconds behind Roma. Martin Kaczmarski finished fourth almost 3 minutes behind. Fifth in the special was Nasser Al-Attiyah who seemed to make up for the lack of potential of his HRX Ford with his crazy speed.

There was “only” 217 km left – enough for seeing a good battle between the two leaders. This time Terranova was faster than Roma by 1 minute 12 seconds, but in the end the Catalan remained in front of his teammate – by only 25 seconds!

In the last special Nasser Al-Attiyah finished third but for him it was enough only for an 8th place in the overall classification with a gap of 37 minutes to Roma. Kaczmarski was fourth in SS4 but managed to stand on the podium in the end. Vladimir Vasilyev could be very happy with the points he got for his fourth place in the World Cup, especially after the problems of his closest rivals Al-Rajhi and Al-Attiyah. 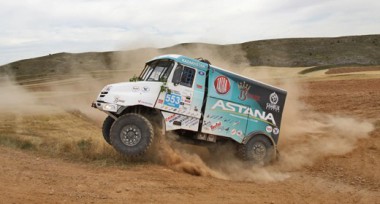 Altogether only 37 cars out of the 61 started reached the finish line, Among bikes, Gerard Farres dominated the race from start to finish in front of Adrian Gallego and Marc Sola. In trucks’ category Artur Ardavicius, a newcomer to Baja Aragón became the winner.

You can find more than 3.000 photos from Baja Aragón HERE. 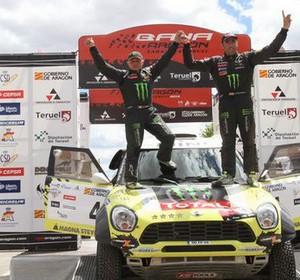 Massive success for the Monster Energy X-raid Team and X-raid Team in Spain’s Baja Aragon. At the end of the three-day...
Copyright 2011-2016 Rallyraid.net - RISE Network. All Right Reserved.
Back to top