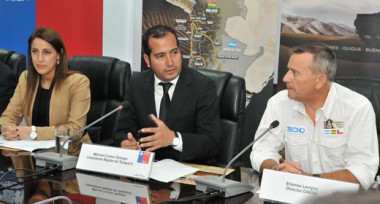 The Region of Tarapacá will be focus of attention in Chile in the Dakar 2015, showing the world its magnificent desert, dunes and a three-day stay in the city (10, 11 and 12 January) for the four categories. This has been officially announced by the region’s main authorities and race director Etienne Lavigne.

The starting signal for the 2015 Dakar Rally took place against the backdrop of the waves crashing against the shore near the Regional Council’s offices, in a ceremony attended this week in Iquique by the Governor of the Region of Tarapacá, Mitchel Cartes, Dakar Rally Director Etienne Lavigne, Under-Secretary for Sports Nicole Sáez, the Mayor of Iquique, Jorge Soria and the Mayor of Alto Hospicio, Ramón Galleguillos.

The Under-Secretary for Sport reminded those present that the confirmation of the Dakar 2015 was postponed following a national emergency: the earthquake that affected the north of the country. “Our responsibility as a country was to make a serious assessment of the situation, considering all the elements of the viability of the Dakar. Today we can say that we acted with the necessary rigour because the event will enable us to safeguard the country’s interests in terms of its environment and heritage.”

Dakar Director Etienne Lavigne emphasised that “the Dakar is the first great international event of 2015, and it will be able to count on major figures from the world of sport in Chile.”

In addition to the rest days on January 10th (bikes and quads) and 12th (cars) that are planned for the city of Iquique, a great attraction is the Village, a small city with events, stands and festive activities that will take place between January 9th and 11th. Fans can see the competitors and their vehicles close up, sharing the excitement of this great sports event with the general public.

The 2015 edition of the Dakar Rally, which will take place from January 4th to 17th, will return to Chile from the trans-Andean locality of Chilecito. Copiapó will be the first stop, and the route will then head for Antofagasta before reaching Iquique on January 9th so the drivers/riders and the local community can enjoy the fiesta of the Dakar. 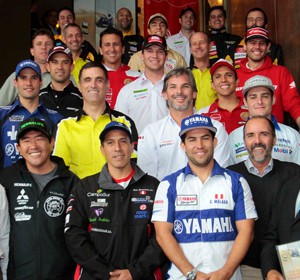 The route of the 2nd edition of the Desafío Inca, the 3rd and final leg of the Dakar Series 2014, was unveiled on Thursday...
Copyright 2011-2016 Rallyraid.net - RISE Network. All Right Reserved.
Back to top