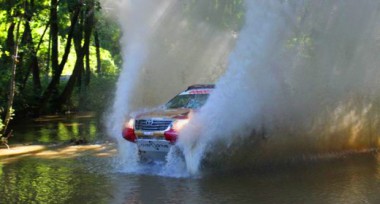 At the end: fireworks. And not only because at the Finish podium the flaming torches were lightning at the ceremony, but also because the Hungarian World Cup race, the HunGarian Baja’s result was decided only at the last kilometers of the race.

The Dakar Rally winner Nasser Al-Attiyah was struggling with technical problems on the first two stages (the first differential of the Toyota was broken), on the last two stages in the afternoon, however, pedal to the metal. He promised it and did it. It is true that as a result, they were more in the air on the last stage than on the ground, the co-driver Matthieu Baumel later said, sometimes he closed his eyes and ducked his head because they went so fast. The top speed was 173 km / h, and knowing the military area is really something!

„I pushed the gas as I could, almost flew – Nasser Al-Attiyah said – we could not have gone faster, we put everything on one page. It was a hell that one minute or two at the finish, when we waited for Terranova to arrive to the finish line, after that the calculation wasn’t going easy as well. But in the end result has born: we won.”

The Mini’s factory driver Orlando Terranova, however, was not in despair, he even said the more the track was drying, the more he enjoyed the race. „I’m not disappointed… Nasser is the star, I’m just a newcomer compared to him. I has an exiting battle with him. Why could he pass us? At the last stage we fell asleep a little” – said Terranova.

By the time they got to the last checkpoint they had already lost twelve minutes, most likely because of helping their teammates.

The overall leader of the World Cup, Vladimir Vasilyev could also stand up to the second step of the podium. At the last stages he was no more risking, since they were still far in front and behind the rivals. „Of course we wanted to win, but in terms of the overall we gained valuable points, which we are very pleased about” – said Vasilyev.

The best hungarian duo was Imre Fodor, Márk Mesterházi, the hungarian champion title defender (Ford Ranger), who after the first round came in the fourth place in the absolute. Fodor had a big grin on his face, but he was reserved „I dont want to celebrate early, the hens are counted at the night, do not want to rush anything.”

And how he was right at the very next stage he got a flat tyre, which costed him several minutes. Despite this, he remained the best among hungarians – he came sixth to the Finish podium.

„I feel good about performance, we could work out our disadvantage because of the puncture. We are at a close level with the world’s best racers, which I’m very happy about” – said Fodor at the finish.

Immediately behind him came Antal Fekete, who currently leads the Hungarian championship’s overall points, and for who was very important the best possible position, because the Hungarian competition is a triple point multiplier. „I really enjoyed the race, it was such a huge challenge to compete with the best racers of the world. It was important that we brought the car in one piece to the parc fermé. The Hungarian championship was also important because of the triple multiplier. I’m happy with the result. It feels good to to stand on the second step of the podium, next to Al-Attiyah in our category. I will always preserve this picture … ” – said Fekete.

The competition ended late evening on Saturday with the Award Ceremony, next to the Sports Hall in Papa – with the flaming torches mentioned above. 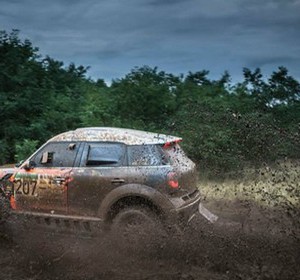 The Hungarian Cross Country World Cup, HunGarian Baja started very exiting with two stages on Saturday. There was everything:...
Copyright 2011-2016 Rallyraid.net - RISE Network. All Right Reserved.
Back to top