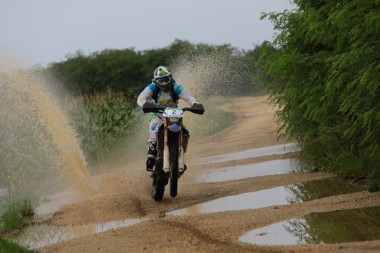 They were up early. On Saturday morning at 7.00, at the Hungarian Cross Country Rally World Cup, HunGarian Baja the bikers started first at Ganna-Csehbanya stage, then the military area near Veszprém.

At the first stage the World Cup leader Alessandro Ruoso won, but on the second the Italian had a bit of problem. The weather condition during night-time (heavy rain and wind) has slightly rearranged the track: tore the ribbons, damaged the signs. So Ruoso, starting first, could not necessarily go on his own speed.

„First of all let me tell you, that the selective on the military area is fantastic, but the wind and the rain did not spare the ribbons, so I had a little trouble with directions. I was asking the marshalls which way to go, but had to stop every two hundred meters, and on several occasions I had to turn back. I do not worry about the time, I just wanted to go fast” – said Ruoso, who is still in the second place according to the overall points, behind the French Adrien Maré.

„The forest section today was beautiful, I enjoyed a lot but not the rain yesterday. Sometimes it was not easy to navigate because the ribbons were lying on the ground due to the storm last night, but after a while we went together with Alessandro (Ruoso). I do not think at the results yet, I will only in the evening” – said Maré, who started to ride at the age four, but started to compete just this year.

While bikers were in the service park, we have received an official statement of the third stage: today morning’s blustering winds tore the signing tapes of SS3 and so the riders encountered some navigational problems. The first two bikes cut down about 40 km from the track and arrived at the finish line well in front of the rest of the field. Organisers repaired the signs and most riders were able to find the right track. Result of SS3 is unofficial.

The Stewards are going to check the GPS devices in the evening and then to decide about the result of SS3. 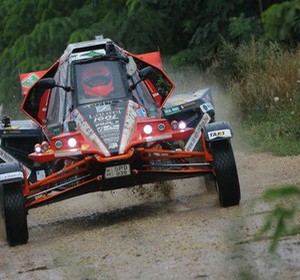 Zoltán Hangodi and his Yamaha HQ Buggy is 12th in the World Cup classification after Leg 1 of HunGarian Baja, fifth round...
Copyright 2011-2016 Rallyraid.net - RISE Network. All Right Reserved.
Back to top