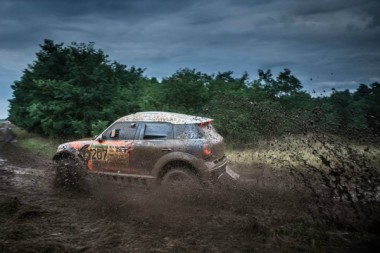 The Hungarian Cross Country World Cup, HunGarian Baja started very exiting with two stages on Saturday. There was everything: technical problems, rollover, nausea – and of course positive stories as well, such big grins to the ear, eye-catching rush, crossing over streams (three to four meter high water curtain) and of course a huge fight for top positions.

Thanks to the sunshine the quality of the track has changed from hour to hour in the morning, some places already in the second stage, dust clouds would indicate the competing cars.

Orlando Terranova won the first, Nasser Al-Attiyah in the second stage – the two of them are fighting for the final victory as well. For now, the Argentine is better, but his 1 minute 10 second advantage is not very reassuring.
„We drove on muddy, slippery roads sometimes, but it was good because at least I have also learned how to drive on this type of road. Nasser is a good reference for us, and although I did not expect that at the second half of the race l will lead the race – because I am here for the first time – now I will try to keep this place” – said Terranova.

„I had a little trouble with the first differential, which caused us to lose some time – a frightening noise came from the front of the car – but I don’t complain. I enjoy the competition, the tracks are good, although it is not easy to win here, but we do our best” – said Al-Attiyah.

The best car in the Hungarian field, the title defender Imre Fodor, Mark Mesterházi duo – is currently in fourth place.

„My grandfather used to say, the hens are counted in the evening, so I do not want to jinx anything. All I can say, it feels great to compete with the top drivers of the world. ”

There were quite a few already eliminated in Saturday’s first two stages: and the factory teams were not spared either: the two main shortfalls are the Mini factory driver Krzysztof Holowczyc, as well as Adam Malysz with Toyota.

Former had to give up the race because his co-driver got sick („After the first stage he got out of the car and lay down on the grass.His face was numb, hands and feet, sweaty – was very scary. Fortunately, there is no problem with him now, but we can not continue the competition” – said Holowczyc), the second flipped his car. „Twenty kilometers from the end of the third stage,on a fast, open stretch, it was a right turn, but when we tried to narrow to turn, a pile of stones threw the front of the car. We landed on the roof, and then we turned over twice – we spent twenty minutes until turned us back to the tires. There was no sense to continuing” – said Malysz’s co-driver, Rafal Marton. 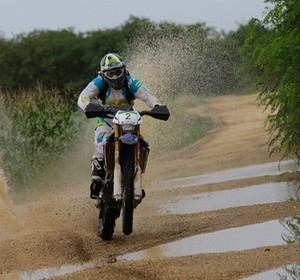 They were up early. On Saturday morning at 7.00, at the Hungarian Cross Country Rally World Cup, HunGarian Baja the bikers...
Copyright 2011-2016 Rallyraid.net - RISE Network. All Right Reserved.
Back to top