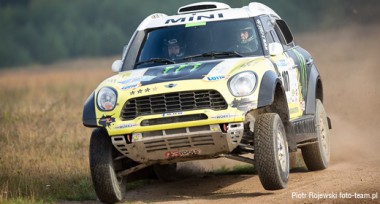 The second passage of Poligon Drawski stage took its toll. For sure the most unlucky driver was Nasser Al-Attiyah. There was a technical failure in his Toyota Hilux Overdrive and a Qatari driver was forced to retire. The same fate hit Tadeusz Błażusiak debuting in Baja Poland 2014 behind the wheel of a car. The motorcycle multiple champion rolled his car and did not finish the stage. However it is possible he would restart tomorrow with many hours loss and without a chance to fight for top places.

Among the competitors scoring points to the FIM World Cup Kuba Przygoński scored a second scratch time and reduced his loss to a leading Adrien Mare from Monaco to less than 4 minutes before two Sunday’s tests. As expected Kamil Wiśniewski (Yamaha Raptor) is the best quad driver who overtakes by over 4 minutes Zbigniew Zych.

Krzysztof Hołowczyc / Xavier Panseri (Mini All4Racing):
– I had to slow down and omit the fire brigade stopping next to the accident. Furthermore the same concerned the quad drivers. The time is a bit worse than during the first run.

Adam Małysz / Rafał Marton (Toyota Hilux Overdrive):
– It was incredibly tough. We had a front diff failure and were forced to cover about 10 km with only a front-wheel drive. The gearbox didn’t work well either – we had problems with second and third gear. Besides that it is fine.

Martin Kaczmarski / Tapio Suominen (Mini All4Racing):
– I didn’t have major problems with a car, although the drive through these bumpy roads was a fight for a life.

Marek Dąbrowski / Jacek Czachor (Toyota Hilux Overdrive):
– We have a drive failure. We don’t know what exactly it is as well as we don’t know if we manage to finish the rally.

Kuba Przygoński (KTM EXC):
– It was very fast. I drove on the limit. The event is very well organized, but it is difficult to run in the ruts after the cars. This time I had no problems. 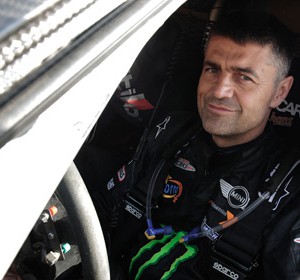