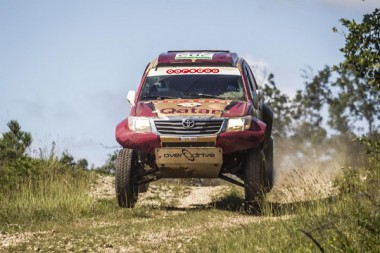 Qatar’s Nasser Saleh Al-Attiyah stormed through from second position to snatch a dramatic last stage victory for Overdrive Racing and the Toyota team in the Hungarian Baja, round seven of the 2014 FIA World Cup for Cross-Country Rallies, on Saturday.

The Qatari and his French co-driver Matthieu Baumel earned the fastest time on the final Lötér special to take outright victory away from Russian Vladimir Vasilyev by the margin of 12min 09sec. Argentina’s Orlando Terranova finished third, a further eight seconds behind the Russian, after incurring a 12-minute penalty near the end that cost him second place. 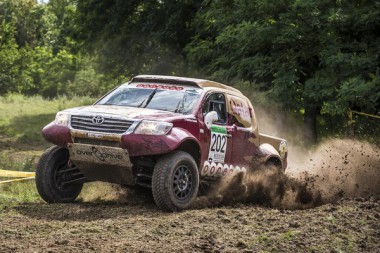 “This was a terrific result for Nasser, Matthieu and Overdrive Racing and particularly pleasing for it to happen so late on,” said Overdrive Racing’s team director Jean-Marc Fortin. “Nasser will also be with us at Baja Poland in a couple of weeks and the result keeps his hopes of winning the championship alive.”

After administration checks at the Varasi Sportcsarnak in the historic baroque town of Pápa in Veszprém county, action got underway on Friday evening with a 58.37km selective section at Kemenes before refuelling, regrouping and the overnight halt.

Al-Attiyah slotted into second position behind Terranova. His time of 37min 26sec was just 38 seconds adrift of the Argentine and left him well placed to challenge over the four selective sections on Saturday. Malysz held fourth position and Dabrowski was classified in seventh.

Two revised selective sections of 54.56km (Erdö) and 96.62km (Lötér), repeated twice, were on the agenda for Saturday before the prize giving in Pápa.

Terranova won the first of the day’s four stages and Al-Attiyah hit back on the second, but Malysz was forced out of the running 20km from the end of the third stage when the Pole flipped his Team Orlen Toyota on a fast, open stretch of road.

“It was a right turn but, when we tried to turn the corner, there was a pile of stones and it threw the car. We landed on the roof and then we turned over twice,” said Malysz’s co-driver Rafal Marton. “We spent 20 minutes upside down until we were turned back on to the wheels. These was no sense in continuing.”

Terranova took a sizeable lead into the repeat of the two stages on Saturday afternoon, but Al-Attiyah was not to be prevented from taking a superb victory for the Overdrive Racing team. Championship leader Vladimir Vasilyev claimed second after Terranova’s late penalty and Dabrowski reached the finish in eighth place. 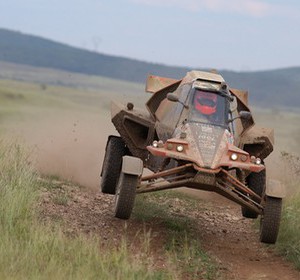 Zoltán Hangodi and the Yamaha HQ Buggy finished 19th overall and 12th in the national championship classification in HunGarian...
Copyright 2011-2016 Rallyraid.net - RISE Network. All Right Reserved.
Back to top