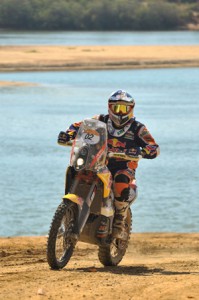 The marathon stage, disputed on Thursday (28th), between the cities San Francisco and Diamantina (Minas Gerais State), marked the 5th stage of the 22th edition of the Rally dos Sertões. The competitors had the biggest stage of the rally this year, with a total of 645.44 km, 335.98 of special test.

In Bikes, the Spaniard Marc Coma (KTM Red Bull Factory Team) won his third stage in five and is on the lead, now with seven minutes of advantage to the Portuguese Paulo Gonçalves (Team Honda HRC), who was third on the day.

Coma said at the end of the day that he liked the stage and he is optimistic. “It was the most complete stage of the rally, with much trial, much navigation and I tried to keep a good pace. I’m very happy for today. It was a great day”, said the Spaniard.

Quads: Nahas wins the marathon stage
In the quads category, only 11 disputed the marathon stage. And the result of the special test changed the first position. Current champion Robert Nahas (RNN Sports) won with a time of 4h057min02s and overcame the Polish Rafal Sonik (Sonik Team) in the overall standings and also the Brazilian Marcelo Medeiros Maranhão (Taguatur Racing), who was the leader. Medeiros fell at the km 268 of the special and lost many time to recover.

Nahas – who has already won two special tests – opened a good advantage in the overall leadership with 22min10s to Medeiros and 29min08s to Sonik.

UTVs
Nineteen UTVs started for the marathon stage on Thursday. Jose Helio Rodrigues and co-driver Edmilson Camargo Jr. (Polaris Racing / Ze and Faces 4×4) were one of the “victims” of the day. At the km 33 of the special test, they had a failure in their UTV and couldn´t continue 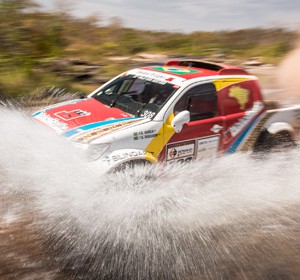