Rally dos Sertões: Gonçalves wins, but Coma is the overall leader in Bikes 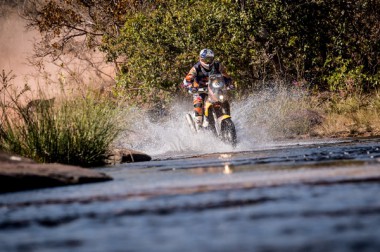 With 363.85 km of special test and 585.30 km in total, the fourth stage of the 22th edition of the Rally dos Sertões, held this Wednesday (27th), was the biggest and hardest so far. Competitors left Paracatu towards the city of São Francisco, both in Minas Gerais State. It was a day that reminded the sands of the desert of Jalapão (Tocantins State). A stage that put equipment, drivers and co-drivers to the maximum test and was marked by several retirements.

In bikes, the Portuguese Paulo Gonçalves (Team Honda HRC), current champion of the Rally dos Sertões, won the fourth stage with the time of 4h24min02s, overcoming the Spaniard Marc Coma (KTM Red Bull Factory Team), who finished in the second place in the special but remains in the overall leadership (9h43min55s) with only 2min04 lead to Gonçalves.

The Portuguese Helder Rodrigues (Team Honda HRC) got the third place in the stage, followed by the Brazilian Jean Azevedo (Red Bull KTM Factory Team), who are third in the overall standings.

Thirty-six of the 37 bikes that started the rally follow in the competition, but only 26 arrived today within the time limit (6h30min). A hard day for everybody.

“Today was a very big stage, with a very strong pace. Now we are in the middle of the rally. I hope to stay competitive and see how the end will be”, said Gonçalves, who is already prepared for the marathon stage which will be held this Thursday (28th), finishing in Diamantina (MG), where competitors may not receive mechanical assistance from his teams.

“Another good day. A big, tough, but very good special. I tried to ride as fast as possible and I think first runner up was a good result today”, said the Spaniard Coma, winner of the Rally dos Sertões in 2010 and current leader of the FIM World Cross Country Rally.

Quads
In the quads category, which had 13 competitors in the field, the rivalry Brazil vs Poland increases. The Polish Rafal Sonik (Sonik Team) arrived ahead, but received a penalty of 16 minutes for not stop in the refueling area.

Only nine quads completed the special within the time limit.

With this result, Zé Hélio and Camargo took the lead in the overall (11h12min18s).

5th Stage: São Francisco (MG) / Diamantina (MG) – Marathon
On Thursday (28th), the competitors depart towards Diamantina (Minas Gerais State) in the dispute of the 5th stage of the Rally dos Sertões 2014. There will be 645.44 km in total on the fifth day (223,57 km of initial liaison, 335.98 km of special and 85,89 km of final liaison). It will be the marathon stage, where, at the end, they may not receive external mechanical assistance. 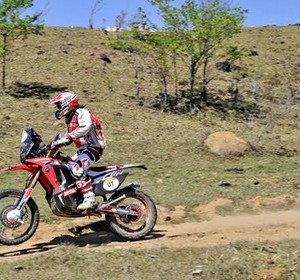 Paulo Goncalves on the Honda CRF450 RALLY, battled to a notable victory in the fourth stage of the Rally dos Sertoes. The Portuguese...
Copyright 2011-2016 Rallyraid.net - RISE Network. All Right Reserved.
Back to top