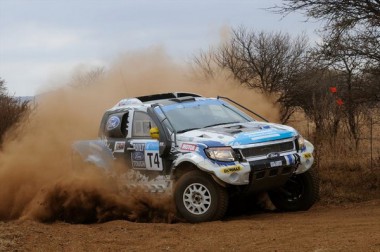 Having starting third in the Production Vehicle category following the Friday qualifying session, and fifth on the road with two Special Vehicle competitors leading the field, the Ford Ranger was able to move up to second in Class T after championship leaders Anthony Taylor and Dennis Murphy (Toyota) encountered early trouble on the first loop.

The raft of recent improvements applied to the mighty V8-powered Ranger ensured that Bertholdt and Rousseau were able to match the pace of the Toyota of Johan and Werner Horn who took over the lead, but their progress was subsequently hampered by a special vehicle that took a short cut and landed up between the much faster Class T competitors.

The intense dust, made worse due to the extremely dry conditions encountered in the Pilansberg area, unfortunately made it impossible to pass the offending vehicle for much of the remainder of the first section – particularly as any off-track excursions were almost guaranteed to result in a puncture at the very least. 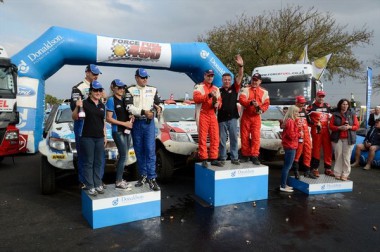 But they eventually managed to find a way through near the end of the section and came into the 15 min service with the T4 Ranger in great shape.

The second loop passed without incident, allowing Bertholdt and Rousseau to score a well-earned second place overall in the Product Vehicle class, just 4 min 22 sec behind winners Johan and Werner Horn. Leeroy Poulter and Rob Howie (Toyota) rounded out the podium in third.

It was a tough day in the office for Manfred Schroder and Japie Badenhorst (T2), though, as they had to start from 49th place after damaging the rear suspension during yesterday’s qualifying.

Dust, dust and more dust defined their Force Fuel 450, as their potential race-winning pace was severely constrained by the long line of slower cars ahead of the Atlas Copco Ford Ranger.

They managed to pass several cars in first part of the loop, but subsequently picked up a puncture that allowed the competitors behind them to reclaim their positions. Ultimately it was a case of hanging in there and aiming for a finish and maximum points for the winners of the Toyota Dealer 450 in Mooi River earlier in the year.

Schroder and Badenhorst ultimately crossed the line 11th in Class T, and 25th place overall amongst the Production and Special Vehicle competitors.

“It’s a great result for the team today. We obviously would have been happier with the win, but given the circumstances the car did really well, and Gary and Siegfried did a superb job to finish in second position.

“This is a tough race with the dust and the rough terrain, so to come out of it with a second is good.

“The big thing that we can take away from this race is that the drivers were over the moon with the car, and all the changes we made worked really well. So we’re definitely on the right track and we can be happy with our performance.

“It was a difficult day for Manfred and Japie, but they brought the car home in one piece and managed to pick up a couple of points, so not all was lost.”

“We had a fantastic run today. Our Atlas Copco Ford Ranger really seemed to keep us on the straight and narrow, and we were able to match the pace of the Toyotas up front.

“It’s nice to see that the changes that were made after the Desert Race have really made a big difference to the Ranger, and we had a really good, clean run.

“It was a really tough event, and if you didn’t keep all your wheels in the tracks the whole time you were guaranteed to break something. The improvements to the Ranger enabled us to keep it tidy and maintain a good pace.

“We definitely lost a lot of time to the Horn brothers after one of the backmarkers took a shortcut and came head-on towards us then turned around. We landed up driving in their dust for the first 126 km and only managed to get ahead of them 18 km before the end of the first loop.

“Due to the thick dust there was absolutely nothing we can do, and this made the difference between us being able to challenge for the lead or having to settle for second place.

“However it was a great event, and we’re delighted to have Atlas Copco and Ford Racing on the podium.”

“It was a very long day for us. We started 49th, and within about 6 km we had passed three vehicles. But then in the dust we clipped a rock and picked up a puncture which allowed them all to pass us again.

“We managed to catch and pass them and a couple of other cars again, and came into service with no problems.

“On the second loop we continued catching the cars ahead but due to the thick dust there was just no way to get past. We made up some ground in the sections with the black clay, but as soon as we hit the red dust it was impossible to see where we were going and we had to constantly back off.

“Japie and I also struggled a bit with the route due to very erratic marking, but there was a bit of everything from the rough stuff to fast flowing sections.

“The car was superb, and it’s the best it has ever been. The improvements to the suspension and traction have made a huge difference to the Ranger and it’s now definitely right on the pace.” 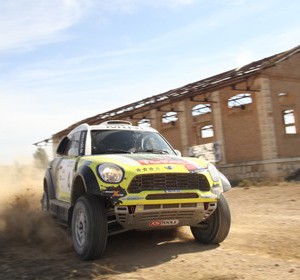 The 31st edition of Baja Aragón brought an exciting battle between Nani Roma and Orlando Terranova – again. In 2013, the Argentinean...
Copyright 2011-2016 Rallyraid.net - RISE Network. All Right Reserved.
Back to top