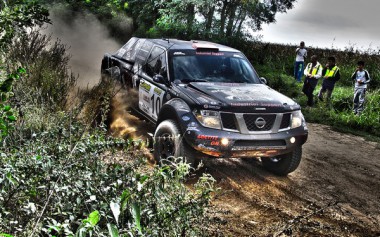 Sólyom Team completed a race full of complications at Adrenalin Cup held in Nagykálló and its surroundings. At the event there was everything: forest, fields, deep sand, mud, sunshine and pouring rain. If the crew Sólyom – Galbács had ranked 11 places higher, they would have won the race.

Olivér Sólyom: “It’s a pity that I spent most of my energy on the Stewards, I argued with them continuously for three days. I can’t as racing drivers those who can’t accept they lost and use all flexible rules just to get a cup at the end. Apart from the – in my opinion – false decisions and the official classification they resulted in, I had a really good time. I hope we can visit the wonderful Nagykálló again next year.”

Mátyás Galbács: “I’ve never seen Olivér to be so upset, it happened that he was murmuring even during a special when he should have been concentrating only on driving. About the official classification I rather don’t say anything. The team had a great time, and the valuable national championship points will be very useful at the end of the season.”

Sólyom Team finished 12th overall and 4th in their category in the Nagykálló rush.

As the countdown to the 2015 Dakar Rally begins to accelerate, the Peugeot-Total squad is continuing to develop the fearsome...
Copyright 2011-2016 Rallyraid.net - RISE Network. All Right Reserved.
Back to top