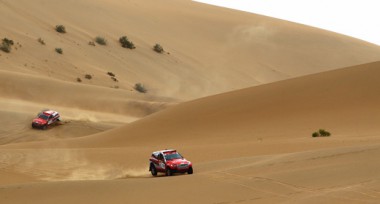 Christian Lavieille and Jean-Pierre Garcin leave Mongolia with another first place victory, their third so far in the China Grand Rally. Nothing it set in stone in the general ranking. In the motorcycle category, Jincheng continue their fantastic winning streak with another double victory.

After two races around Alxa Youqi, the competitors of the China Grand Rally make their way towards Zhangye in the Gansu province. The race is 395km long of which 187 are selective sectors. With only 30 seconds separating them in the general ranking, this seemed to be the ideal opportunity for the drivers of Team Haval to prove their superiority over each other. The sixth stage started near a sandy river followed by very large and rough sand dunes and ending once the drivers cross a 20km stretch full of plant life.

After this stage, the end result of the 2014 China Grand Rally remains open and up to speculation.

The rivalry remains strong and contested between Team Great Wall’s teammates. Following Wei Han’s victory yesterday, Lavieille and Garcin respond by pushing their vehicle to the limit and closing the space between them and their teammate with the Haval numbered 103. At some point, they even overtook their teammate following his navigational error. However, Wei Han surprised everybody and made an incredible comeback, crossing the finishing line a few seconds before the French duo. Despite Wei Han’s victory today, the few seconds he gained today were insufficient to propel him to first place, therefore making Lavieille today’s victor and tops the overall ranking.

The competition is no match for Haval: Miao Ma in his Nissan M05 seemed to stopped reaching for the glory of the top places in the podium and seemed satisfied to settle for third place at the China Grand Rally’s end destination in Dunhuang on September 12th. He remains third in general ranking and was able to race without any major problems, although he did necessitate a few quick stops due to overly high pressured tires. Even though Bin Liu’s buggy is better suited to a different terrain structure, he demonstrated great skill, finishing 7 minutes before Zhou Yong, ergo coming in fourth. The winner of last year’s race also seemed to have overly high pressured tires and was also forced to stop several times, a miscalculation that has cost him dearly today.

The overall ranking’s first place has moved from Wei Han and Cheng Fen to Christian Lavieille and Jean-Pierre Garcin. The two are separate by 1’18”. Miao Ma came in third, nearly 50 minutes after today’s winner. Zhou Yong arrived over an hour after Lavieille. 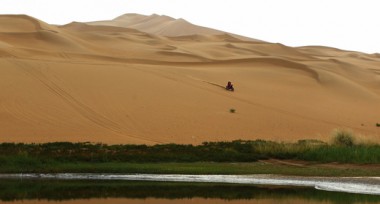 In the motorcycle category, team Jincheng remain the uncontested team, achieving their third double victory of this year’s China Grand Rally. Leader of the overall ranking Wen Min Su suffered a crash of his motorcycle; luckily no heavy damage was sustained. Astonishingly, Wen Min Su made an incredible recovery, finishing first with a few seconds before his teammate Zhou Tian.

Tomorrow, Sunday September 7th, the 2014 China Grand Rally contestants will be given some time to rest in Zhangye before a very short race of two kilometers awaits them in mid-afternoon. Broadcasted on live television on CCTV-5, the race is highly anticipated and will have viewers on the edge of their seats.”

Christian Lavieille (Haval – number  102) – Second of the race and first in general ranking: .”Wei Han once again left us in the dust after 40km. He was first to start the race and followed a rally track that was created a few weeks ago, heading the wrong way. Jean-Pierre’s perceptive eye recognized another set of tracks, which we followed and ended being the correct route. We believed to have outdistanced Wei Han. However, he managed to catch up with us and overtake us in the last leg of the race. It was impossible for us to overtake him in the end without putting our vehicle at risk.”

Wei Han (Haval – number  103) – 2nd of the race at 1’53’’ : “The race was a magnificent one. I crossed these dunes several times in the best. It was extremely competitive, Christian and I overtook each other several times during the race. Our tire pressure was too high and we suffered for it in the dunes.”

Bin Liu (Buggy – number  306) – 4th of the race at 10’29’’ : ”The car was difficult to drive in the sinuous parts of the race, it lacks the power necessary for these dunes. Considering all this, I am very pleased with the result.”

Zhou Yong (Toyota Pickup Overdrive – number  106) – 5th of the race at 17’47’’ : “The race was a beautiful one with picturesque dunes, although one had to be careful of the broken dunes and the dangers they present. Our problem was that our tire pressure was too high; we had to stop several times to lower it.

Wen Min Su (Jincheng – number 10) – Winner of the race and first in overall ranking : ”I was very nervous this morning before the race, I knew this race would be a decisive one. Because of that I was driving really fast and crashed my motorcycle, but I did not get hurt. I still managed to win the race, I am ecstatic!”

Zhou Tian (Jincheng – numéro 9) – 2nd of the race at 6’’ : ”It was raining this morning when we started the race. I did not take any risks on the racetrack. In the dunes I saw my teammate crash. He signalled, insisting I continue driving and not stop on his account.” 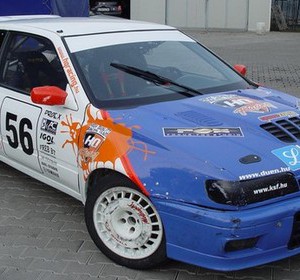 Zoltán Hangodi didn’t have too much time to relax after Baja Poland: although cross-country rally season continues only...
Copyright 2011-2016 Rallyraid.net - RISE Network. All Right Reserved.
Back to top