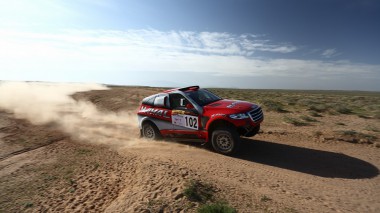 The duel remains thoroughly exciting between the two rivals as they fight for first place in general ranking. In this 8th stage of the China Grand Rally 2014, spanning 360km of which 169km were timed, Christian Lavieille and Jean-Pierre Garcin finish with a minute advantage over their teammates Wei Han and Cheng Feng.

Following yesterday’s rest until  mid-afternoon and a short 2km stage in Zhangye, the China Grand Rally caravan set up camp 200km westward in Jiuquan. The rivalry between Team Haval’s competitors had the audience on the edge of their seats and this week begins in an even more spectacular race. 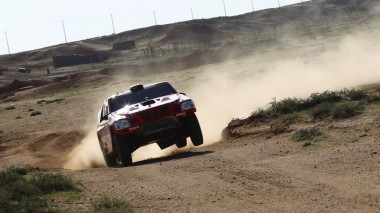 Lavieille and Garcin’s victories continue to accumulate with their latest win of the China Grand Rally. The race in the midst of the Gansu province’s uneven and rocky terrain tested the drivers’ skill once again. Team Haval’s internal rivalry seemed to have reached new heights today when only a split second separated Lavieille and Wei Han’s crossing of the finishing line! In a 169km race such a small advantage truly is astounding. The French duo however, regret having wasted several minutes figuring out the correct track, which would have given them a larger time advantage over Wei Han than 1’19”.

Miao Ma retains his third place spot in his Nissan M05 prepared by Dessoude’s team. A great result considering the fact that they had to stop and help Xian Wang in his car numbered 159, who had crashed his vehicle in the early parts of the timed section of the stage. Fortunately, nobody was injured and the team will attempt to repair the vehicle before tomorrow’s stage. It was an equally disheartening day for Bin Liu, who was fifth this morning in general ranking, was unable to start his V8 buggy properly at the start due to an oil pressure problem. Zhou Yong took full advantage of his competitor’s misfortune, managing to come in fifth in the race. Zhou Yong, winner of last year’s rally, now occupies fourth place in general ranking, finally satisfied and comfortable with his car he comes in fifth today despite suffering an injury to his right eye in the rally’s third stage. 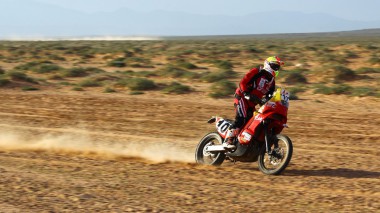 In the motorcycle category, Wen Min Su crashed his Jincheng 30km before the end of the stage. Defying all odds, the man climbed back on his motorcycle with undamped spirits and won his fifth stage of the China Grand Rally 2014! He was taken to the hospital and underwent medical examination, which thankfully found no fractures. The leader of the general ranking will therefore be present in tomorrow’s stage. Shi Yumeng came in second in his Honda.

Tomorrow, Tuesday September 9th, the competitors will be faced with a 600km long stage, of which 246km will be timed. The 9th stage of the rally will take place in Dunhuang. In terms of navigation, the drivers should not face any major problems. The rapid and sandy racetrack will certain provide its fair share of challenges.

AUTOS
Christian Lavieille (Haval – number  102) – Winner of the stage and first in general ranking: “Unfortunately we lost about 2 minutes trying to find the right way. Its easier for our competitors who can simply follow our dusts, thus not making the same mistakes.”

Wei Han (Haval – number  102) – 2nd of the stage at 1’’ : “The team optimised the car yesterday and it perfect to drive today, despite the many dangers of the racetrack.”

Miao Ma (Nissan M05 – number  107) – 3rd of the stage at 3’06’’ : “When the car is well prepared everything is easier. We are really satisfied today. At the start of the stage, the driver ahead of us lost control of his car, crashing it. We stopped a few seconds to make sure the drivers were okay before quickly resuming the race.” 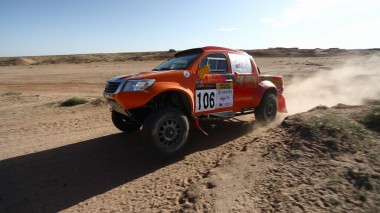 Zhou Yong (Toyota Pickup Overdrive – number  106) – 5th of the stage at 6’11’’ : “We changed a few things on the car for today’s race in Zhangye. The handling was much better and the car felt steadier. It was a difficult rally for me, i have had sand in my eyes since the first days in the dunes, my left eye is practically shut.”

Philippe Raud (Toyota Landcruiser – number  135) – 18th of the stage at 42’33’’ and 12th in overall ranking: “It’s my first time in China and I am really happy to have been given the opportunity to discover these dunes. I was not expecting all this! Team Great Wall has shown me a great reception from the first day, and my relationship to my copilote Eric Simonin, is perfect. It’s the first time we share a car, he really has a good sense of humour and is always optimistic.” 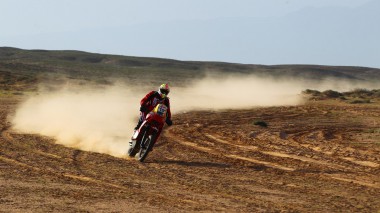 Wen Min Su (Jincheng – number 10) – Winner of the stage and first in general ranking: “I crashed 30km before the end of the stage whilst in a curve along the racetrack. I hope its not too bad, I really want to continue racing tomorrow.” 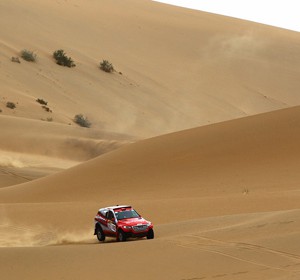 Christian Lavieille and Jean-Pierre Garcin leave Mongolia with another first place victory, their third so far in the China...
Copyright 2011-2016 Rallyraid.net - RISE Network. All Right Reserved.
Back to top