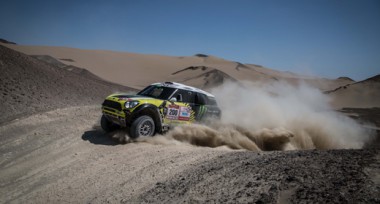 Nani Roma (ESP) and Michel Périn (FRA) gave the Monster Energy X-raid Team the win in Peru’s Desafio Inca. With their MINI ALL4 Racing, the pairing won all the six special stages that had to be contested over the course of the three-day event. At the end of some 1000 kilometres and 13 hours of special-stage action, they crossed the finish line with a lead of more than 90 minutes over second-placed Chilean Rodrigo Moreno.

In addition to the battle for a top result, the Desafio Inca also was supposed to be a test. Only rarely, the drivers have the chance of driving three days in and across a desert. So, the dunes in Peru represented the perfect location for taking both man and machinery to their very limits. On day one, Roma was hampered by some stomach problems but succeeded in winning the two special stages, nevertheless. And on the following two days, he and his French co-driver also proved to be invincible.

“I had three very good days,” said the Monster Energy X-raid Team driver after the event. “Spending so much time in the dunes and the sand with the MINI was big fun – and a really good preparation. When we raced here with the Dakar, in 2012, the dunes were a true highlight.”

“Nani and Michel did a very good job and finished every special stage without encountering any major problems,” added Team Manager Sven Quandt. “In the Dakar held some years ago, Peru’s dunes represented a major challenge for our drivers and our MINI. Therefore, the Desafio Inca represents a really good test for all those involved.”

Kings of Peru: Nani Roma, Claudio Rodríguez and Alonso Elías are the winners of the 2014 Desafío Inca 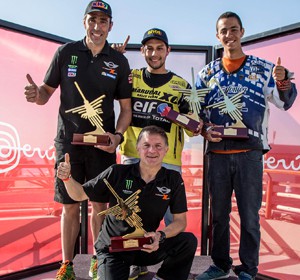 Kings of Peru: Nani Roma, Claudio Rodríguez and Alonso Elías are the winners of the 2014 Desafío Inca

The second edition of the Desafío Inca on Peruvian soil was a massive success, with the best competitors in each of the three...
Copyright 2011-2016 Rallyraid.net - RISE Network. All Right Reserved.
Back to top