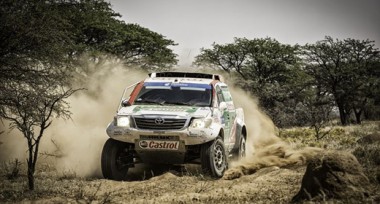 The Vryburg 450 – spiritual home of cross-country racing in South Africa, which took place on 12 and 13 September this year, gave Castrol Team Toyota a golden opportunity to consolidate their lead in the championship. And that’s exactly what defending champion Anthony Taylor and navigator Dennis Murphy did on the dusty dirt roads around the Northwest towns of Vryburg, Louwna and Excelsior.

The prologue, which is a shorter section of the race route, is run on the Friday before each round of the Donaldson Cross-Country Championship. On the Vryburg 450, which formed round six of the eight-round series, this constituted a 100 km-long test on some of the fastest roads the competitors have seen all year.

Taylor/Murphy got off to a perfect start, by posting the fastest time of all the production vehicles during the prologue. This put them third overall on the road, and first of the near-Dakar spec bakkies in Class T. With a good road position, the pair proceeded to do what they do best: Go fast! Unfortunately their progress was hampered by a puncture, which allowed Ford driver Chris Visser to overtake them. The dusty conditions made it impossible for Taylor to overtake Visser again, despite catching the Ford shortly after replacing the shredded tyre on the Toyota Hilux.

“During the second loop we decided to settle down and take the points for second place,” explains Taylor. “It just wasn’t worth taking a big risk to overtake Chris, because one rock in the wrong place could have easily ended our championship hopes.”

Things didn’t go quite as smoothly for teammates Leeroy Poulter and Rob Howie, in the second Castrol Team Toyota Hiliux (T23). They had an issue with their on-board GPS during the prologue, and ended up following the wrong route. This cost them seven minutes in the end, and placed Poulter in 11th place (Production Vehicles) for the start. With a fair number of competitors ahead of him, and no wind to help clear the dust, Poulter/Howie had their work cut out. The pair clearly had the bit between their teeth, though, as they scythed their way up into 5th place – bagging 11 points for their efforts, despite having to endure three punctures during the day.

This means that Taylor now has a 14 point lead over Malalane Toyota’s Johan Horn (T17), who finished 8th in Vryburg after a tough prologue, though in reality each team has to drop the points from one event at the end of the year. With just two rounds to go, Taylor’s lead is really 22 points, as the Horn brothers (Johan and Werner) will have to drop their worst performance, which thanks to a highly consistent year, means they will have to lose 8 points as things stand at present. Poulter remains steady in third place on the championship standings.

Another notable Toyota performance on the Vryburg 450 was that of local lads Malcolm Kock and navigator Johan Burger, who came third in the production category. The pair had a disappointing race at the Toyota 1000 Desert Race in June, but was clearly on form at their home event.

In Class S, for production vehicles with solid rear axels and engines no larger than 4,000 cc, it was 4×4 Megaworld’s Deon Venter and navigator Jaco van Aardt who brought their Toyota Hilux home in first position. They were followed home by Jannie Visser and Joks le Roux in the Ruwacon Racing Toyota Hilux.

As a result of the great performances of all the Toyota crews, there were seven Toyota Hiluxes in the Top Ten at Vryburg. This was good enough to hand the Manufacturer’s prize to Toyota yet again.

The next race on the calendar is the Ford Dealer 450, which traditionally takes place in the area around Thaba ‘Nchu in the Freestate. This will be round seven in the championship, and it all kicks off on 24 October, 2014. 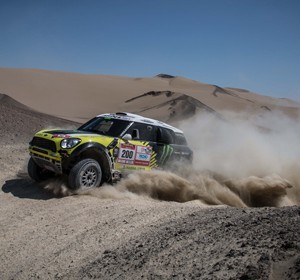