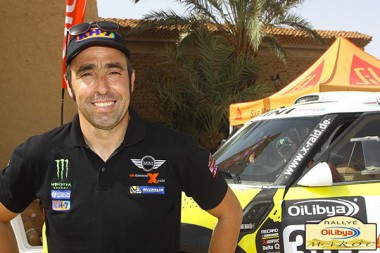 If in the bike category all scenarios can be imagined for the final victory, the Car teams can really get their hands dirty! Between the Mini All4 and the Toyota Hilux, the match should be a beauty. Nani Roma / Michel Perin, Nasser Al-Attiyah / Matthieu Baumel, Orlando Terranova / Rolando Graue, the current leaders of the FIA World Cup, Vladimir Vasilyev / Konstantin Zhiltsov … have in their grip real powerful engines that have been dominating the Dakar for three years.

To counter them, Giniel de Villiers / Dirk von Zitzewitz (South African winner of the 2009 Dakar) with Volkswagen should calm the ardour of the German company just as the Polish duo Marek Dabrowski / Jacek Czachor, holders of the World Cup and and currently ranked 4th overall with only 2 rounds to go. The arrival of Dutchman Bernhard Ten Brinke in the Team Overdrive Racing and the return of Argentinean Lucio Alvarez banana put pressure on the boss Jean-Marc Fortin.

In the Open category….

A mix of the best in cross country rally raiding lead this category specifically created for cars teams not participating in the FIA World Cup. In this jungle of particularly strong competitors, Jerome Pélichet / Eugenie Decré (Toyota Hilux), Pascal Boutet / Bruno Seillet (Trio) … have much to do on the track in the face of competitors eager for results but also some fun!

Trucks, it’s going to be spectacular!

There are many…… Faithful to the competition and still driven by the same passion, the Portuguese Elisabete Jacinto loves the Oilibya Rally of Morocco .Faced with this popular lady , Gerard De Rooy an Iveco driver, a second Petronas Team De Rooy is entrusted to Johannes Stacey. In this rich gathering, all brands are represented: Tatra Ginaf, Unimog, DAF, Renault, MAN, Scania, Mercedes. 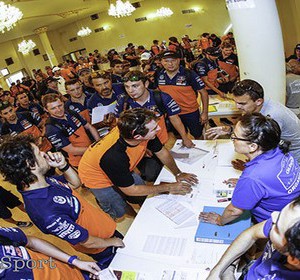 Erfoud : Hotel Bellere, Zero hour ! The vast interior reception room is for one day only the centre stage of the administrative...
Copyright 2011-2016 Rallyraid.net - RISE Network. All Right Reserved.
Back to top