If he has not yet won the OiLibya Rally of Morocco, Joan Barreda is a stage winner today! The Spaniard had his moment, he left well behind this morning gaining as much as twenty nine competitors in a tricky special, a mix of fast tracks, navigation and the first dunes. Teammate Paolo Goncalves, defending champion took second position. Marc Coma finished third. 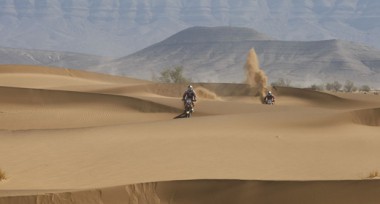 It was at 6:45 am when the first competitors left the hotel Bélère in Erfoud for the start of the first stage of this OiLibya rally of Morocco 2014, twenty-seven km away. A 276 km long special awaited , navigators expertise and fast driving were key in winning this leg .. Honda knew it This land, is a second home they like it, they train here, they know….

Joan Barreda was quick to overtake his contenders and made his own mark. Only one had a similar run: Chaleco Lopez on KTM. Behind him the forces regrouped. Coma, Goncalves, Helder Rodriguez, Ruben Faria … together in the dunes, then they scattered when they came back on the fast track. Paolo Goncalves fought back back hard .But the Portuguese had a scary moment towards the end , “a little dangerous.” He says…

So Barreda won the stage, 1’49 ‘ahead of teammate Goncalves. Marc Coma, third only 2 ‘behind the Portuguese, at 1’51’ from Barreda. Helder Rodriguez, the fourth is a little less than 4 ‘. Behind Jordi Viladoms. he experienced some technical problems that made him lose time. He is sixth at 6’53 ‘. Chaleco, did not have a good day. He lost almost 10’ Sam Sunderland lost 15 ‘, as for Alain Duclos, a delay of 23’30’ because of fuel supply problem. 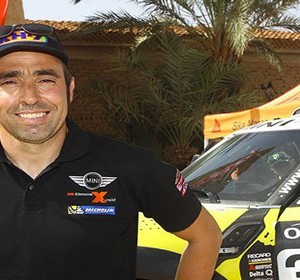 If in the bike category all scenarios can be imagined for the final victory, the Car teams can really get their hands dirty!...
Copyright 2011-2016 Rallyraid.net - RISE Network. All Right Reserved.
Back to top