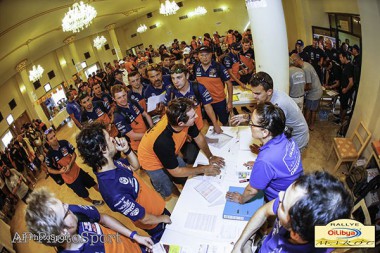 Erfoud : Hotel Bellere, Zero hour ! The vast interior reception room is for one day only the centre stage of the administrative Verifications where a long string of men and women go through their administrative checks. All the NPO Events staff, always smiling welcomes each individual team members with the appropriate word of welcome. The first steps of this journey are simple to do, but essential: get your stamp card, stamped with : ERTF, Astrium, license control, water provisions, medical check and putting on the bracelet showing that you are “Fit for service.”

Once these formalities endorsed, in the front of the hotel it’s a traffic jam : Sticking panels, ckeck of each engine, weighing vehicles … and the panel ‘end of stage zero’ is crossed, the first race is scheduled for tomorrow, 6.45 am for the bikes , 8.13 am for the cars, between Erfoud and Damia.

The most impressive during the verifications, is the variety of languages spoken (31 nationalities attending) as varied as the race itself! Other highlights include the smiles, the humour, the joy of each person ahead of the week. During this first contact, the competitors almost wished it to continue … the euphoria is palpable, tomorrow morning actually lives in the here and now as they are eager to get into the nitty-gritty of what the Oilibya Rally of Morocco is all about.

Between Coma and Gonçalves, the heart dangles

What is at Stake in this final of the FIM Cross-Country Rallies World Championship, is the title of 2014 world champion, and its being played out between two champions, wit just 10 units between them….how tantalising can it get ? This morning they high fived : “may man the best win! ”

In 2013, Paulo Gonçalves won the Oilibya Rally of Morocco at the same time pocketing world champion title and now putting it back into play this season.

They are not the only ones two to have a chance at glory .Joan Barreda is considered the fastest driver, Helder Rodrigues won here in 2012, (both on Honda.) Alain Duclos and Joan Pedrero Sherco want it! badly Not to mention ‘Chaleco’ Lopez, Sam Sunderland, Jordi Arcarons, Ruben Faria, Jakub Przygonski (back in the saddle after his accident in Abu Dhabi) all KTM Red Bull experienced riders. 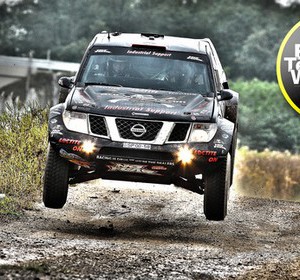 A busy weekend is coming at Hungaroring: Extreme Technical Weekend will be held there on 5th October. On Sunday spectators...
Copyright 2011-2016 Rallyraid.net - RISE Network. All Right Reserved.
Back to top