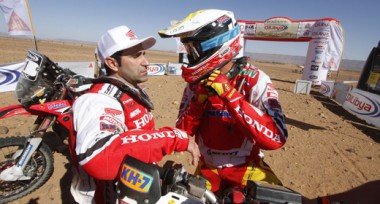 He strikes again! Opening the tracks is never easy, but for Joan Barreda (Honda), it didn’t seem to be a a problem. The winner of the special had a perfect race (well.. almost). Teammate Jeremias Israel (Honda) took second place, 2 ‘behind giving Honda their second double victory. For yesterdays second, Paolo Goncalves, it was bit more tricky.. Marc Coma takes third place again, this time 2’01 behind ‘Barreda, who increased his lead in the overall. He now is 3’22 ahead
THE RACE AS IT HAPPENED

“I’m happy with my day, Barreda says,. Yesterday, we prepared well for this special (with my team). This was an important stage I am proud of the navigation, I was able to drive quickly through the dunes. The sensations were great, everything was perfect … until we reached kilometer 160 I then made a small navigation mistake and I lost a few precious minutes, but nothing serious. I’ve found my route in the end ….and the Way-Point !. ”

There was a lot of sand today. There was also a lot of navigation. None of the leaders had any hiccups, , apart that is, for Paolo Goncalves. Last year’s winner, the World Champion title holder struggled with his road book unwinder , unlucky…. Caught up by Marc Coma in the first half of the special, even though he started two minutes later, he lost time repairing his road book unwinder and another 2 additional minutes lost… everybody has a bad day now and again, let’s hope that is the last one !

“It is not that bad said Goncalves. There are still four days of racing ahead. The important thing is that today’s team work was well done. ”

Jeremias Israel, the new Honda rookie thus took second place of the day after a great stage he was very consistent. Sam Sunderland, ex- Honda, now KTM is the fourth of the day, at 2’20 from his former teammate, Barreda. Toby Price (Orlen – KTM) surprised everyone at the early stage, just before the dunes, he was the second best time at the first CP (km 78). But it got more complicated in the dunes. He finished ninth in the end of the special at 7’05 ‘

Overall, Joan Barreda has a 3’22 “lead over Marc Coma, This is an advantage, but it’s a weak one . Especially as tomorrow, Barreda will open the tracks, this is in an ideal situation for Coma. The current leader of the World Championship should be happy with Goncalves’ underperformance , after all this man is his biggest opponent for the title :. Goncalves : 7’29 ‘ ouch!!. Taking fifth in the stage, at 5’42’ ‘, Helder Rodrigues (Honda) is now 9’02 “. Overall,, Francisco López is 16’27 ‘. Let’s see how tomorrows stage from erfoud to zagora plays out…. 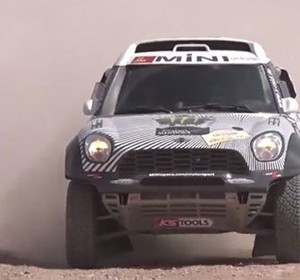 What a start for Orlando Terranova who really does not want to lose his title this year. Faced with a strong competition...
Copyright 2011-2016 Rallyraid.net - RISE Network. All Right Reserved.
Back to top