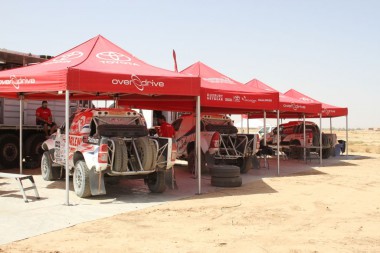 If the bike battle for victory seems over with, In the car Category, it could not be tighter. This morning there was only 3’30 between Nasser Al-Attiyah and Orlando Terranova. There is now only 1’15”. At loggerheads, even if neither one nor the other won the stage, that goes to Giniel De Villiers, at least the unfortunate team will not leave empty handed. Terranova takes second place in front of Juan Nani Roma (Mini).

If you wanted to test the very limits of your mechanics, this stage was for you! Juan Nani Roma arrived with a left rear tire almost in shreds; Bernhard Ten Brinke arrived with only three brakes … Today was a very technical race of 300 km. With a lot of accelerations and braking, the cars are tired upon arrival, and so are the men and women. Initially, Nasser Al-Attiyah opened the track. On the first CP, he was already behind Terranova, after 130 kilometers of racing, “We had a puncture in the first part, says the Qatari. So we then chose to stay close to Orlando. I’m not unhappy with my day. It was a very trying special for my tires but Michelin are really very good. ”

Orlando Terranova was not much luckier … “We had a puncture at kilometer 1!!!! Nasser also had some problems with punctures, so I found myself opening the road from kilometer 80 onwards. It was not easy, there was no tracks. But it’s a good workout. Just like the fight with Nasser. “The Argentine is doing well. He seems to be evolving, maturing. He does not want to lose his title. A Win in front of three former Dakar winners it would be something to be proud of. 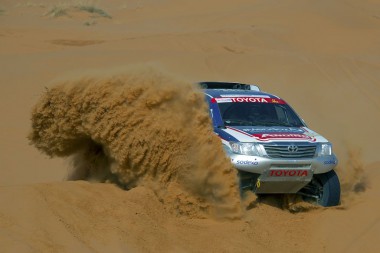 Al-Attiyah seems serene “I have a minute (actually 1’15 ‘). Tomorrow, it won’t be complicated, Orly leaves in front of me, and all I have to do is follow. “Hoping that a short stage, (only 113 km), will not create significant differences. He forgets, or doesn’t yet know that De-Villiers will open the tracks, so ….no mistakes and give everything you’ve got to resist Terranova

De Villiers wins his stage, Juan Nani Roma (Mini) took third place at 4’09 ‘behind the Toyota, he is just 1” behind Terranova. On the third stage, he had to return to camp prematurely, for a gearbox problem after only 11 kilometers. Two days earlier, he punctured three times in twenty kilometers..

The big loser of the day, it’s Bernhard Ten Brinke. The Dutchman, very regular up to here, had a problem on his Toyota Hilux. “It was not a good day. There was a problem with a rear brake, we could not fix it, and so we finished the special with only three brakes “. He lost 44’39 ‘” And slipped into fifth place overall. His compatriot Erik Van Loon (Mini), rises onto the third step of the podium. Vladimir Vasilyev on a terrain that suits him best has begun to accelerate. He is only 5’33” ‘behind. And the Russian driver is motivated! He is the leader of the World Championship. Even if there’s still the Baja Portalegre, here in Morocco the points count double. The Russian has no choice. He will have to do his best on the last 113 kilometers of the OiLibya Rally of Morocco. 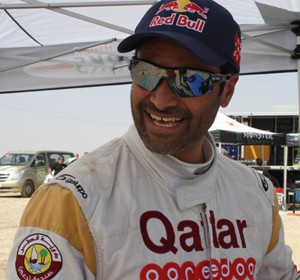 There was a lot of sand today as drivers crossed the erg of Chegaga. This didn’t help Giniel De Villiers’ Toyota. The South...
Copyright 2011-2016 Rallyraid.net - RISE Network. All Right Reserved.
Back to top