It was going to be a fast stage on a long day. The fifth OiLibya Rally of Morocco special was perhaps not the longest on paper, but definitely the slowest! It took Joan Barreda (the winner of the day) 4 hours and 15 minutes to finish. An Average of 71 km an hour.. It felt endless! In narrow corridors between two valleys: agility was better than power. It was not a day like any other. If you are used to see the Hondas win, we are less used to seeing Juan Pedredro (Sherco) finish second, and Helder Rodrigues (Honda) just behind. 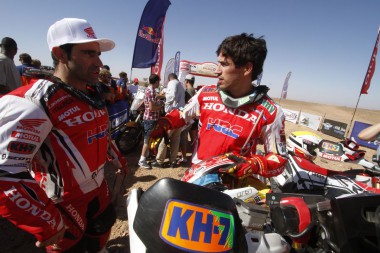 Joan Barreda wins his fourth stage in five days. Perfection!. Yet the Catalan rider didn’t seem that overjoyed maybe it’s the daunting 208 km liaison to reach Marrakech. Same face for Helder Rodrigues. What has happened? And where is Paolo Goncalves,the other Honda rider, second overall this morning, and the only one able to worry Marc Coma? Unfortunately, the Portuguese is back in Ouarzazate. He fell in the first third of the race; he managed to re- join the CP1 at kilometer 130 before giving up. According to his Honda team’s Twitter it happened whilst overtaking Toby Price (Orlen – KTM) he made a mistake in a rocky section. And dismounted! He was evacuated by helicopter to the Ouarzazate hospital as a precaution, but the news is reassuring.

And why did it take them so long? “It was really hard, says Marc Coma. It was really technical throughout the special, more like trial, I tried to keep a good pace until refueling. After that I compromised between fast and cautious. But it was very difficult to keep up because it was so technical. I made a small navigational error which cost me 1 ‘or 1’30 “.

Coma finished eighth at 7’36” behind ‘Barreda. If he doesn’t know what happened to Goncalves, his only true opponent, not seeing him arrive at refueling made him realize that the Portuguese was no longer a threat. Goncalves was 1’35 ‘overall. And this propels Sam Sunderland, another KTM on the second step of the podium. The sixth of the day at 5’41 from ‘Barreda, Sunderland will not seek to disturb his leader. Especially since the special tomorrow is only 113 km, he would need to fill almost 10 minutes.

Behind Barreda, the second is none other than the Sherco rider, Juan Perdredo. An excellent performance for the French team, also placing Alain Duclos in the top 10 “It was very technical, in turn, acknowledges the Spaniard. We do not have speed on our side, so we suffered in the sand. But the mountain is a perfect environment for the Sherco. “The same goes for Alain Duclos.

Helder Rodrigues thus takes the third stage. He stopped to help his teammate Paolo Goncalves, but the latter told him to continue. Rodrigues also took third place overall behind the two KTMs at 12’05 ‘ from Coma just 2’07’ behind Sunderland, and second at 9’58 ‘.

Barreda thus won his fourth stage in five days.He is now in the fourth place overall at 15’31 from ‘Marc Coma. Amazing really when you consider he took a 30 minute penalty on the second day. But the big news is that Marc Coma is the World Champion. Nothing is official, but we never really doubted. There was ten points in it, He was ahead of Goncalves. Which meant that for the latter, he had to either win or and that Coma was at most sixth or that Coma should abandon and Goncalves, at worst reached fifth. Now the question does not arise. The OiLibya Rally of Morocco is the final of the World Championship, Coma cannot be threatened, even if had to give up. 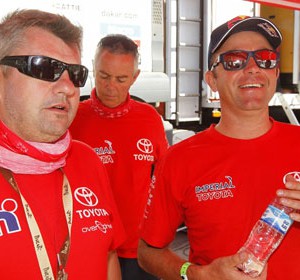 If the bike battle for victory seems over with, In the car Category, it could not be tighter. This morning there was only...
Copyright 2011-2016 Rallyraid.net - RISE Network. All Right Reserved.
Back to top