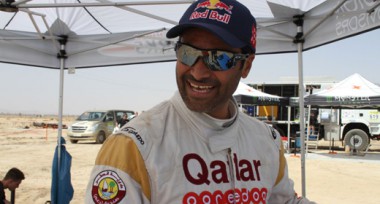 He‘s back !. For his return to Mini, Nasser Al-Attiyah did not wait that long to deliver. Third yesterday, with just 1’05 ‘in it, he won the second special today. A beautiful special, by the way, through rocks, sand and dunes and a three-way battle between yesterday’s winner, Orlando Terranova (Mini), yesterday’s second Giniel de Villiers (Toyota) again, second today. So Al-Attiyah, takes the overall lead. But on the scoreboard, Juan Nani Roma is interfering in third place.

This stage is worth watching on TV. With a sixty kilometer section of sand and dunes, it was bound to be exciting. The three leaders of the race battling it out bumper to bumper, it’s a great show in the desert. Orlando Terranova opened the tracks, he was not successful. He was quickly joined by his two immediate pursuers, Giniel De Villiers and Nasser Al-Attiyah. Great stuff…..

Al-Attiyah dominates quickly. He’s first all-the cps . De Villiers is not far behind, only 1’22’’. “We found a short cut, others didn’t follow us. We saved time, “said the South African who suffers from lack of power in his Toyota regular compared to the diesel Minis.

Orlando Terranova from Argentina had a bad start. Eighth at the first cp he’d already conceded 3’43 ‘in only 80 kilometers. He never gives up though to the despair of Al-Attiyah who says he was, hampered in its tracks. The Qatari is still furious. “he never moves out of the way What can you do? ” he says at the finish line. Between the winners of the Dakar, and former members of the defunct Team Volkswagen, we can understand.
Terranova did not even stop at the end of special as is the custom. Boiling over, are we ?? or perhaps a little shy. “He has to accept that there are faster drivers than him” launches Al-Attiyah, who does not lose his cool, always smiling. Winning does helps…

Fourteenth to leave this morning, for Juan Nani Roma it was a beautiful day. He takes the third and final time, 1’53 ‘ behind Al-Attiyah. It has not been easy for he Spaniard in his Mini, starting so far back, he had to overtake so many slower competitors. That was the price to pay for his triple puncture 20 km into the very first stage yesterday.

Overall, Nasser Al-Attiyah is a tiny 39 ‘ in front of De Villiers. The race is still wide open! As Al-Attiyah is back in the Mini,( he ran all season with Toyota Overdrive), while De Villiers only returned to competition after a 10 month leave of absence. That is, since the last Dakar. Third is Orlando Terranova, at 1’37 ‘.Its a good move for Nani Roma he only has 23’12 ‘to catch up… 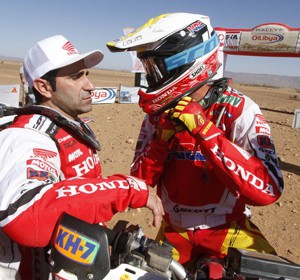 He strikes again! Opening the tracks is never easy, but for Joan Barreda (Honda), it didn’t seem to be a a problem. The winner...
Copyright 2011-2016 Rallyraid.net - RISE Network. All Right Reserved.
Back to top