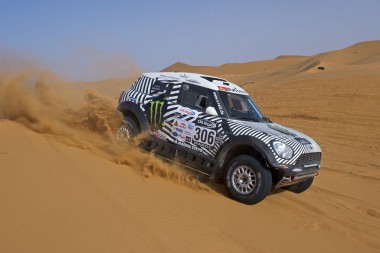 No “bumper to bumper” battle today… Always together, these three: Nasser Al-Attiyah (Mini), Giniel De-Villiers (Toyota) and Orlando Terranova (Mini), Terranova is the first to head out. Certainly De-Villiers pulled up at end of the stage, leaving Bernhard Ten Brinke (Toyota) to take third place,. It was expected but … We were expecting more of a four way scramble.., So where’s Nani Roma? It was his gear box we’ll find out much later..
THE RACE AS IT HAPPENED

Remember yesterday, Orlando Terranova came fourth; he had been criticized by Nasser Al-Attiyah and Giniel de Villiers, for not being fair play, having blocked them. Proof of the good spirit in the rally-raid community, when the three arrived almost together today Al-Attiyah went immediately to ask “Orly” where Roma was. The latter replied, ‘I saw him stop in the beginning of the special. I asked him if everything was OK. as he was out of the car, apparently an engine problem. “At the time of writing this article, Roma seems to have left the race.

Orlando Terranova therefore signs his second victory in three days. “It was difficult, dangerous with bumps. It was a little more motocross than rally, smiled Terranova. I really enjoyed it. Tomorrow I will have to lead the way as I did yesterday. The race remains undecided” he is not wrong in his analysis. Ahead of Al-Attiyah( 1’57 ‘’)and De Villiers (3’35’’) Ten Brinke slipped in. That means in the overall Al-Attiyah still leads by a tiny 40 seconds. De Villiers is not much further at 2’17 ‘. As Terranova said himself, he will open the tracks tomorrow, the hierarchy could still be reversed! But if all three are above the rest, De-Villiers is not really on par with his rivals. “The beginning was not easy. We were able to come back and stay twenty seconds behind Nasser, he confesses at the finish. It was very fast. It was too fast for us to stay with Nasser. But we had a good special no errors. It’s true that we suffered a bit on the fast parts. Our Toyota “regular “ lacks the torque of the Mini diesel. ”

Behind them the gaps get deeper, but the Dutch Bernhard Ten Brinke and Erik Van Loon respectively at 18’11 ‘and 20’46’ overall. Vladimir Vasilyev may , The leader in the World Championship is under the threat of Al-Attiyah, but can’t compete with him on the OiLibya Rally of Morocco, Sixth at 30’13 ‘, he is relatively safe from the others as Marek Dabrowski, is the first at 45’21 ‘. 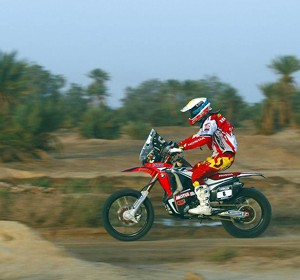 Certainly no one can stop Joan Barreda (Honda) in Morocco. Well…, the 30 minute penalty imposed on him yesterday for speeding...
Copyright 2011-2016 Rallyraid.net - RISE Network. All Right Reserved.
Back to top