The first three of the day are … three KTMs

After three days of Honda’s dominance the KTMs take over. Marc Coma was never far away, but even with a 30’ penalty, Joan Barreda, was undeniably dominating the race. Paolo Goncalves was also the leader of the overall this morning. But then what happened? The first three of the day are … three KTMs! There may be an explanation. It’s the sand !!!.. The dunes of the Chegaga erg are well known in the Rally-Raid world. Marc Coma loves them, just like his teammate (this year), Sam Sunderland, Toby Price (KTM – Orlen) has also impressed in recent days. He is third in 1’10 ‘. In the overall rankings Coma is back on top. 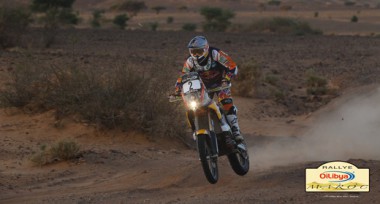 The first to arrive are: Joan Barreda (Honda) who opened the tracks today. Behind him are Paolo Goncalves (Honda) who was quickly caught by Sam Sunderland. The two became inseparable and then they caught up with Barreda at the very end of the stage, without overtaking. All three grouped at the finish line. And here we see Paolo Goncalves a bit upset at Sam Sunderland’s attitude The two men know each other well, having rubbed shoulders last year at Honda. Difficult to know what really happened.
Moto

For Sunderland, The key lies in the results. Third, the last two days (after Barreda’s penalty on the 2nd stage), he’s now second in this stage, just 5 ‘ from the leader, Marc Coma. Too bad for him, on Saturday, on the first special losing 14’46’, he is now fourth in the General at 12’29’.

Goncalves says on the matter. “No, it’s a normal race situation. We are friends and when something happens that is not 100% happy with, I think it ‘s normal that we speak about it “ he said. “There was a lot of off-piste and dunes to cross today. I have not lost much time on Marc. The CRF 450 Honda did a fantastic job on all fronts. There were more than 150 Ks of dunes, where the bike was working well and the power it can develop here is amazing. ”

For Barreda, it was not as good as the other days. The king of the first three scratches fell back today. Taking fifth place at 3’47 ‘. “I knew it would be a tough day, you could see it on the road book. I opened the track, so I had to stay focused on my navigation and I stayed calm. ”

The best performance of the day is for Coma. The KTM rider won the stage and therefore gains on his opponents, chief among them,, Paolo Goncalves. Coma now has a 1’35 ” advantage. Behind him Sam Sunderland takes the third place from Helder Rodrigues (Honda), and is at 11’53’’ and Rodrigues’ at 16’34’’ from Coma. Francisco López, fifth at 16’46 just behind the Portuguese too. The Chilean is getting into the rhythm. 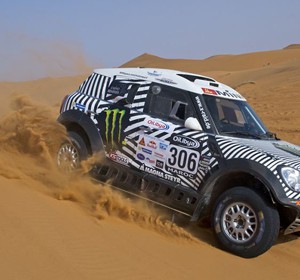