The Qatari won the 15th edition of the OiLibya rally 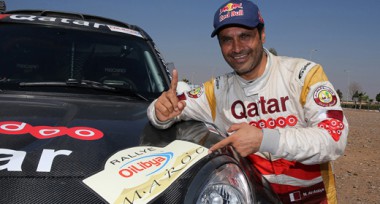 A one minute penalty yesterday for speeding, and Nasser Al-Attiyah’s‘ advantage was reduced to a mere 15 seconds ahead of Orlando Terranova! What an exciting context to start the 113 km race around Marrakech, but the Qatari did it and won the 15th edition of the OiLibya rally of Morocco, even if it was his first appearance here! A proud moment for locals as well: as an Arab winning such a prestigious event on Arab soil. The joy was palpable. The Argentinean Orlando Terranova, who won in 2013 bows respectfully to the leader, as Nasser gets closer to the Russian Vladimir Vasilyev for the world title, which will be played out on the Baja Portalegre in Portugal in early November.

The Dutchmen, Erik Van Loon and Wouter Rosegaar turns the podium into a 100% X-Raid bonanza enough to satisfy Sven Quandt who had brought no less than eight Minis to Morocco, all are on arrival including team Nani Roma / Michel Perin, winners of the Dakar title. They were hassled by repeated punctures (in stage 2) and gearbox problems in stage 4.

The Victory in 2WD goes to Juke Dessoude driven by Thierry Magnaldi and François Borsotto; that of T2 returns to the Japanese “Auto Body” Land Cruiser – Toyota driven, masterfully handled by Jun Mitsuhashi and Alain Guehennec.

In the Open category, the Iveco Petronas Team de Rooy was as always flamboyant, the third placeis Ginaf Gert Huzink – Robertus Buursen. Elisabete Jacinto “the lady of the race” (MAN) finished fourth and will be back in the saddle at the end of December on the Africa Eco Race. Victory goes to Nissan and the Portuguese, Paulo Rui Ferreira – Jorge Monteiro after some serious battling with Jerome Pelichet – Eugenie Decré (Toyota Overdrive.)

Nasser AL-ATTIYAH (winner – Mini All4): “I slept well last night even with the 1 minute penalty that fell just before I went to bed. The only thing I planned to do this morning was to attack harder from the start! Matthieu was okay with it! He did a great job that allowed me to push without the slightest hesitation. That’s why we took the advantage in this rather nice stage. I’m glad I won it, I am getting closer to the World Cup. We’ll see when we go to Portugal, I’m happy to go there and try to bring the title home, As for the rally here, it was just fantastic and really great! It was not easy so I’m doubly happy! It is a perfect test ahead of the Dakar. ”

Orlando TERRANOVA (2nd Mini All4): “The years go by and do not look the same! I have no particular comment to make the week was intense and at every special I gave myself thoroughly. We had to drive fast and make no mistakes and no technical problems. We never slowed down, but Nasser was the fastest! ”

Erik VAN LOON (3rd – Mini All4): “Personally, I compare the Moroccan Rally to a mini-Dakar. Fast, dunes, off-piste tracks and even harder WRC style. We thought we’d finish in the 5 or 6th place, we are third on the podium with Nasser and Orly that is just fantastic. I was consistent throughout the 6 stages, no major problems. Very happy with my navigator Wouter, who did such a good job. Driving the Mini: I just feel better and better, I will return to the Rally of Morocco. ”

Thierry Magnaldi (11th – Winner 2WD): “Morocco is still as beautiful and pleasant. as always I really enjoyed the 6 stages as did my navigator François (Borsotto). I made a few mistakes, which penalized us overall. It was hard to get back into the rhythm, I thank André Dessoude for inviting me to do this Morocco. ”

Mitsuhashi Jan (12th – winner T2): “We have just experienced a great week. No worries only an alert with the power steering! This Toyota has ended his life, and will not be used for the next Dakar, a new one is on the way … ”

Gerhard OF ROOY (Open winner – Truck): “We tried a new teammate and the cohabitation is positive. Our two trucks drove well and we’ve done a good job on it. Last year we didn’t come because of a delay in the preparation of the engine. This year, our presence was imperative.
“We took the old truck because the new one is being finished. But the difference is minimal. With the Morocco Rally, testing is complete as is the satisfaction as well as the composition of the team and mechanical team “The rally was fantastic, not too long but beautiful enough for testing the equipment. The win was not the most important, but it’s good for the spirit of the group. “ 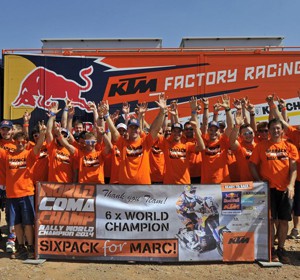