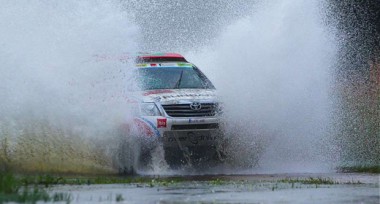 Overdrive Racing’s Reinaldo Varela, João Ramos and Marek Dabrowski finished third, eighth and 11th overall in Portugal’s 28th Baja Portalegre 500, the 10th and final round of the 2014 FIA World Cup for Cross-Country Rallies, which took place in the Nerpor area of Portalegre on Friday and Saturday.
Varela and fellow Brazilian co-driver Gustavo Gugelmin were on a charge through the second of the longer stages and were the virtual leaders at the two passage controls on their way to third overall.

Portugal’s João Ramos and co-driver Vitor Jesus recorded the quickest time on the first selective section and held the outright lead for a time on Saturday before slipping back to finish in eighth overall after an accident near the end of SS2 and late mechanical problems.

The Polish duo of Marek Dabrowski and Jacek Czachor reached the finish in 11th overall in the Team Orlen-backed Toyota Hilux after slipping as low as 19th after SS2.

The event was won by the Portuguese crew of Ricardo and Manuel Porém, while Russian Vladimir Vasilyev pipped Qatar’s Nasser Saleh Al-Attiyah to the 2015 FIA World Cup Drivers’ title after finishing sixth, four places behind the Qatari former champion. Dutchman Bernhard Ten Brinke was a non-starter in the fourth Overdrive Toyota. 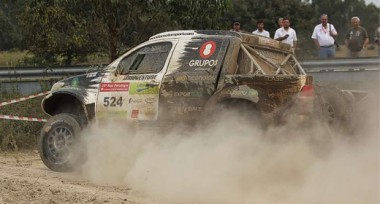 “Once again the Overdrive Racing team showed that we have the pace and the competitiveness to match and beat all our rivals with the Toyota Hilux,” said Overdrive Racing’s team director Jean-Marc Fortin.  “João and Vitor set a fastest time and Reinaldo and Gustavo were on a fast pace through the last stage. This all bodes well for our continued preparations for the Dakar Rally.”
Al-Attiyah snatched a 0.9sec lead over local driver Miguel Barbosa through the opening timed 5.52km super special stage, while the Overdrive Racing trio of Varela, Ramos and Dabrowski were classified in fourth, sixth and seventh overall.

The meat of the action took place over a pair of timed selective sections of 200.52km and 248.11km on Saturday through the remote Portuguese countryside. Overdrive Racing’s Ramos was in superb form through the first one and the Portuguese clocked the fastest time of 2hr 17min 07sec to snatch a 10-second outright lead from Barbosa and move half a minute in front of third-placed Vladimir Vasilyev. Varela and Dabrowski were sixth and 13th quickest and held sixth and 19th overall, after the Pole dropped vital time on the stage.

The longer second section would not only decide the outcome of the 2015 FIA World Cup, but it would also bring the curtain down on a season where Overdrive Racing had already taken four outright victories. Varela was the quickest driver in the entire field at the first passage control point after 60.24km and had moved up to a virtual third in the overall standings. Ramos was running seventh and Al-Attiyah was just edging the battle with Vasilyev for FIA World Cup supremacy, but the title looked to be heading the way of the Russian.

At PC2, after 142.09km, Varela maintained his virtual stage lead and climbed to a potential second position, as Ramos was running in seventh and slipped to fifth overall. Over the closing 106 kilometres, Varela lost a little time and reached the stage finish with the third quickest time to confirm a similar position in the overall standings. Ramos and Dabrowski reached the ceremonial finish in eighth and 11th overall. 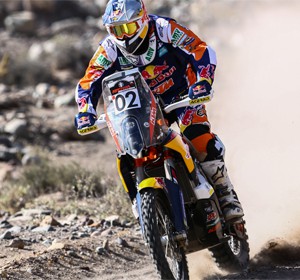 KTM riders, Claudio Rodriguez and Pablo Quintanilla both of Chile took 1-2 in the Atacama Rally on Saturday with KTM factory...
Copyright 2011-2016 Rallyraid.net - RISE Network. All Right Reserved.
Back to top