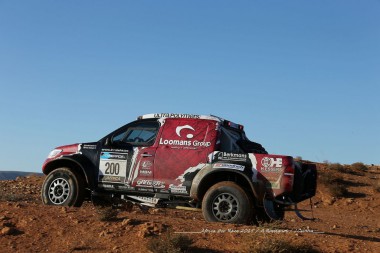 Temperature was reaching just above 5°C around 9.45am when the first bike crossed the finish line of stage 1 of the Africa Eco Race 2015 set near Guersif in the west suburbs of Nador. As we could have expected, Pal Anders ULLEVALSETER didn’t do a single error in the bikes category, as well as Jacky LOOMANS in the car category and the surprising Miklos KOVACS did the job for the truck category. But already some of the participants which were favourites for the podium considerably reduced their “JOKER” during the 116km of the first special stage.

René METGE had announced it: “ This first short stage is close to Nador on purpose in order for everyone to go south in Morocco by day. It will not be easy and could hide some surprises”.
The Sporting director’s words were confirmed as accidents occurred on two and four wheels.

First of all in the car category with the spectacular crash of Balazs SZALAY at km 24. This accident required the evasan by helicopter of his co-driver, Laszlo BUNKOCZI which was taken to the Nador hospital for medical checks.  Luckily, it was the only crashes of the day, but Mathieu SERRADORI as well as Yves FROMONT lost a lot of time due to mechanical problems.  A day which was not easy for the bikes also. Indeed, many bikers were handicapped by a track with low grip explained Jean Antoine SABATIER finishing 5th position after having lost nearly 10 minutes on Jacky LOOMANS and his Overdrive TOYOTA.

An explanation confirmed by the excellent results of the H3 HUMMER, starting with Andrey CHEREDNIKOV, 2nd, 4 seconds behind LOOMANS. Yuriy SAZONOV finished 3rd at 5 minutes and finally Miroslav ZAPLETAL ended the day 4th a bit under 9 minutes. Some navigation errors also happened meaning the gaps are already significant.

The big surprise came in the Truck category with a nice stage victory for Miklos KOVACS who managed to overtake the 3 time winner TATRA driver Tomas TOMECEK and the KAMAZ of Anton SHIBALOV. This excellent result was rewarded by the excellent work of Peter CZEGLEDI, the navigator of the SCANIA truck. 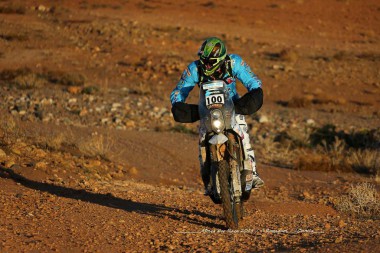 On 2 wheels and for his return in Africa, Pal Anders ULLEVALSETER had a nice stage, not doing a single error in navigation even though he was the track opener.

The Norwegians were actually quite present today on December 30th as John Olav LINDTJORN, finished 2nd at about 8 minutes behind whereas Gilles VANDERWEYEN ended 3rd just in front of Austria’s Robert THEURETZBACHER, who had some navigation problems. Stefano PELLONI from Italy riding the only HONDA bike to be in the top 5 pack surrounded by KTMs. The last of the “big” names on this edition of the Africa Eco Race that has had problems is David FRETIGNE, who’s dashboard completely dismantled itself after only 19km, obliging him to end the stage with a temporary solution and by riding slowly to the end.  But he will for sure find the opportunity to recover some of the time he lost until the end of the race.

Tomorrow, for the last day of this 2014 year, the competitors of this seventh edition of the Africa Eco Race will reach the first Moroccan dunes and 377km long stage between Jorf el Hamam and Tagounite. 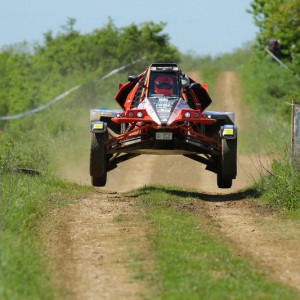 2014 brought another shiny silver medal for Zoltán Hangodi and HQ Racing in category T3 of FIA World Cup for Cross-Country...
Copyright 2011-2016 Rallyraid.net - RISE Network. All Right Reserved.
Back to top