With a sequence of three consecutive successes and a Mini that boasts proven reliability and performance, the X-Raid team can claim to be the favourite for the 2015 edition, with title holder Nani Roma and Nasser Al Attiyah. However, the arrival of a majestic trio behind the wheels of the brand new Peugeots could disrupt their march to victory, as could the improving performance expected from the Toyota drivers.

The deployment of strength is still just as impressive in the X-Raid team, who will be entering 10 Mini All4Racing in the rally this year. What’s more, the armada will be supplemented by a Buggy, displaying Sven Qandt’s thirst for innovation. The German boss is entrusting this vehicle of the future to a team member of the past, who drove the Mini on its baptism of fire on the Dakar 2011: Guerlain Chicherit. However, to move from a fine series of victories to what would become a veritable Mini era, the team is counting on a masterful quartet including two former winners, Joan “Nani” Roma and Nasser Al Attiyah, and two very experienced pretenders to the crown, Orlando Terranova and Krzysztof Holowczyc. Nevertheless, even with four first-rate drivers, the three times title winners are not safe from the competition which has been transformed since the last edition. Out of the last five winners still racing, three of them drive for teams other than X-Raid and intend to make life difficult for the Minis.

The entry into action of the Peugeot DKR 2008 is a total game-changer, since the Lion brand has recruited the driver with the most titles on the event, Stéphane Peterhansel; the driver considered to be the fastest, Carlos Sainz; and surely the most promising newcomer, five times winner on the bike Cyril Despres. If the prowess displayed by the technical teams in other disciplines proves to be transposable to rally-raid, the return of Peugeot to the Dakar could see the ‘Lion’ roar. However, the new entrants to the rally are not the only ones wanting to upset the statistical favourites. In the Toyota team, Giniel De Villiers is counting on a significantly re-engineered Hilux Pick-up to return to the highest step of the podium that he conquered in 2009 on the first loop from Buenos Aires and back. The Overdrive clan will also have the opportunity to shine with Christian Lavieille, Marek Dabrowski or Lucio Alvarez.

The journey through the list of competitors also gives a reminder that buggy drivers are also capable of glorious feats, achieving perfectly deserved finishes in the Top 10, or even better. Robby Gordon, who even finished on the podium in 2009, still hopes to see a new version of his “Gordini” triumph on the Dakar. In a more discrete but perhaps just as ambitious manner, Philippe Gache does not intend to content himself with his regular status as a member of the elite: returning to the wheel of the leading SMG buggy, he will be backed up by Adam Malysz and Ronan Chabot. In the squad of MD Rallye’s Optimus buggies, the entry into competition of the two times winner of the Le Mans 24 hours race, Romain Dumas, will be particularly observed, with Pascal Thomasse as his specialist teacher for the dunes. Lastly, the Argentineans will also be represented by the driver of one of the two Renault Dusters, Emiliano Spataro, who is knocking on the door of the top 10 and boasts all the qualities to make an entrance. 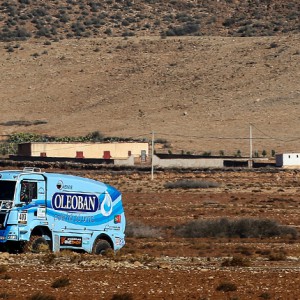 At the start of the Africa Eco Race the Portuguese team of Elisabete Jacinto, José Marques and Marco Cochinho was penalized...
Copyright 2011-2016 Rallyraid.net - RISE Network. All Right Reserved.
Back to top