After a full year of work, thousands of miles of testing and countless all-nighters, Robby Gordon and his HST Gordini race car were reunited Monday in Buenos Aires, Argentina, in preparation for Sunday’s start of the 2015 Dakar Rally – the world’s most challenging motorsports event.

Over its nearly 30-year history, the Dakar Rally has become the ultimate test of both man and machine, allowing a select few the opportunity to claim victory in the ultimate international sporting challenge and thousands more – vehicles and competitors alike – beaten and broken in pursuit of glory.

Gordon, perhaps one of the greatest off-road champions of all time, knows the frustration and challenges of Dakar more than most. He knows his 11th attempt to become the first American driver to win the overall title remains a massive challenge for his single-car team against the multi-car efforts of operations supported by Mini, Peugeot, Toyota, Renault, Ford and others.

In total 665 vehicles will begin the 2015 Dakar Rally, with Gordon and navigator Johnny Campbell among 138 entries in the car class. There are an additional 164 in the motorcycle class, 48 quads and 64 trucks. Fifty-three nations will be represented in the field, with Gordon’s effort being the only entry from the United States.

While racing against factory teams with budgets reportedly as high as $100 million is daunting, one thing the Californian never lacks is confidence.

“Like every year, our objective and our belief is that we can win the overall title,” Gordon said. “We will race against some of the greatest off-road drivers and teams in the world, but if we didn’t believe we could compete we wouldn’t enter the Dakar. More than any other race we have ever entered, the Dakar is about teamwork, organization and execution. We believe we have the experience to win and a team that can execute. It will come down to me as the driver not making mistakes and every person on the team doing their job. This is the ultimate challenge.”

That challenge consists of crossing 9,111 kilometers (5,661 miles) of desert terrain in Argentina, Bolivia and Chile over 14 days. Gordon is fond of saying that the Dakar Rally is like competing in 13 Daytona 500s or Indianapolis 500s on consecutive days, including rebuilding your car each night.

The team’s best finish came in 2009 when Gordon was third overall. He has accumulated 11 stage victories, including his first attempt in 2005, becoming the first American in history to record a stage win. In his previous 10 starts, Gordon has finished in the top 15 five times, giving the championship driver the confidence required for a race that took last year’s winner Nani Roma more than 50 hours of driving time to complete.

“The Dakar Rally is such a huge race in virtually every country of the world and the United States is catching on fast,” Gordon said. “More than 1 billion people will watch the race on television in 190 countries this year and millions more will be on site in South America. I can only imagine what becoming the first American team to win this race will do for its popularity in the United States. It’s our goal to expose this great challenge to the passionate motorsports fans of the U.S.”

In 2014 more than 3.9 million spectators lined the course in the most heavily populated areas of Argentina, Bolivia and Chile, and the crowd is expected to grow in 2015.

The team’s effort will begin Jan. 3 in front of a massive audience on the steps of “La Casa Rosada,” the presidential palace in Argentina for the annual podium ceremony. If tradition holds, Gordon will again stir the excitement of the crowd by backing his Gordini off the huge podium where the drivers are introduced and literally jump his car into the 2015 Rally just has he would one of his Stadium Super Trucks.

The pomp and circumstance of the Dakar Rally preliminaries will be replaced the next day with the first 833 kilometers of competition through the twisting roads of the Argentinian countryside. 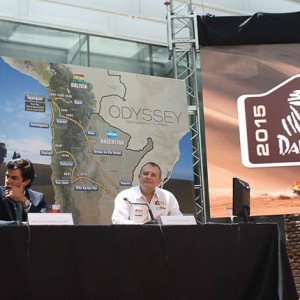 At the end of last week, the 2015 Dakar presentation conferences enabled competitors from Argentina, Chile and Bolivia to get an enhanced...
Copyright 2011-2016 Rallyraid.net - RISE Network. All Right Reserved.
Back to top