The Portuguese pilot Elisabete Jacinto wasn’t very lucky today at the fourth stage of the Africa Race 2015 which was fulfilled between Assa and As Sakn. The OLEOBAN® team started today’s stage with an excellent performance until CP1, where they were second among the trucks ahead of the Russian KAMAZ of Sergey Kuprianov, when the support of the front bumper from the Portuguese MAN TGS team broke. 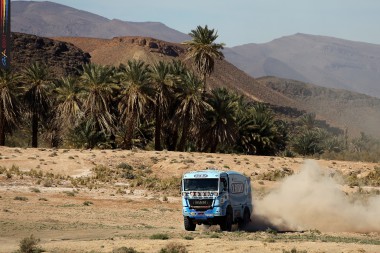 Despite this massive setback, the trio formed by Elisabete Jacinto, José Marques and Marco Cochinho remained in the race. In order to penalize the minimum as possible the Portuguese team used an alternative route in an attempt to complete the four CPs that made today’s stage. However, they missed two checkpoints: “Today luck wasn’t on our side. The support of the front bumper broke shortly after we left CP1 which forced us to leave the normal route of today’s stage. We failed two CPs and, as a consequence, we will face a large penalty. Still, we will work hard and do everything we can to recover the truck so that we can continue in the race until the end. The goal now is to make good results in stages” said Elisabete Jacinto.

The fifth journey of this seventh edition of the Africa Race is fulfilled tomorrow between As Sakn Sakn and Dakhla. It will be the last selective sector held on Moroccan soil because after the rest day, which takes place again in the coastal town of Dakhla, the caravan enters in Mauritania. Tomorrow, competitors will face a special of 225 kilometres held along a fast but rocky path until they reach a magnificent descent to the immense Oued Hamra. The track will then become very winding. Tomorrow the navigation will require a good performance and it will be a key factor to achieve a good ranking. 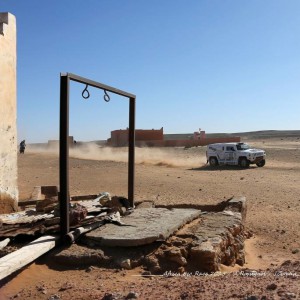 The second last Moroccan stage of the 2015 Africa Eco Race was a sort of big descent towards southern Morocco but nothing...
Copyright 2011-2016 Rallyraid.net - RISE Network. All Right Reserved.
Back to top