The second last Moroccan stage of the 2015 Africa Eco Race was a sort of big descent towards southern Morocco but nothing impossible appart from the fact that waypoints were divided by two in order to have a more interesting and selective navigation.
A difficulty which was accepted by the participants as a whole but added to a very technical day, today’s stage between Assa and Oued Aarraid gave the opportunity to the top list to make the difference and also to animate this beautiful Moroccan day. 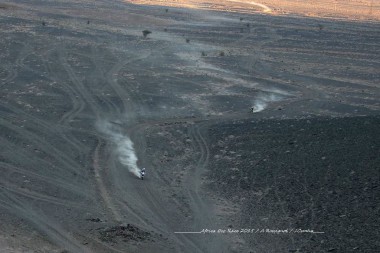 A very violent wind was sweeping the finish line, situated not far away from As Sakn, when Pal Anders ULLEVALSETER crossed the line in 1st position as he has done everyday since the beginning of the Rally. But, he nearly got beaten by Robert THEURETZBACHER who came closer and closer to him just after 100km of stage. After the refuel of CP 3, ULLEVALSETER did a second navigation error the same day.

The Austrian understood the error and tried to take advantage of it by changing cape. Unfortunately THEURETZBACHER got a bit lost and finally finished 7’25’’ behind the Norwegian. He even got passed by Italy’s Stefano PELLONI and his HONDA. A good day for the italian, beating numerous KTMs after a difficult stage the day before. Indeed, he had to change the engine of his motorbike, but one of the special features of the Africa Eco Race is that you can continue the race even if you have such problems.

A nice comeback from Vadim PRITULYAK, 5th on today’s stage finishing 15’58’’ behind the leader and 21 seconds in front of Namibia’s WALDSCHMIDT who is doing a fantastic job since the start of the rally. Young french-senegalese, Julien SANCHEZ created the surprise of the day by entering the top 10 with his YAMAHA.

The biker who lost a lot today is Gilles VENDERWEYEN finishing only seventh, 27’17’’ behind the leader after he got lost during the stage. As a result, the Belgian lost his 3rd position to THEURETZBACHER. Nobert DUBOIS also had a few problems of which losing the rear of his KTM about 40 km before the end of the stage.
Finally, David FRETIGNE continues his journey on his 1200 SUPER TENERE YAMAHA, finishing 17th, just in front of Bernard MONTAZ and his 650 XR HONDA. 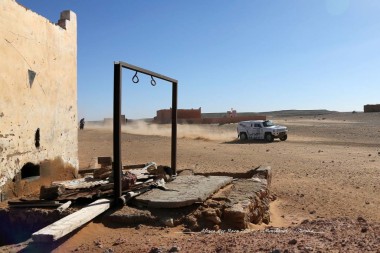 In the Auto category, the day was passionating with a battle in the top ranks between the 4WDs, as usual bothered by the « small » X18s PREDATOR Buggy of Mathieu SERRADORI, once again 2nd the day’s stage, 5’43’’ behind Miroslav ZAPLETAL. The Czech indeed started the day in 7th position this morning in Assa, pushing as hard as he possibly could at the wheel of his H3 evo to beat Jackie LOOMANS and his TOYOTA and cross the line in 1st postion.

A nice operation as this victory puts him 1st in the general car ranks, 6’27’’ in front of Kazakhstan’s Yuriy SAZONOV once again in the top 3 today and LOOMANS 19’12’’ behind.

Also, Kanat SHAGIROV and his TOYOTA Hilux finishes in 4th position the day before the last Moroccan stage. This makes a total of four 4WDs cars in the top of the standings followed closely by the two buggies of Mathieu SERRADORI and Jean Antoine SABATIER who unfortunately lost more time today.
A nice performance from Belgium’s Erwin IMSCHOOT proving he is learning a lot at the wheel of his TOYOTA Hilux finishing 8th on today’s stage, just in front of Russia’s Anton GRIGOROV and his 03 OSCAR fianlly finishing in the top 10. The good regularity of IMSCHOOT puts him in 7th position in the general ranks.

In the T2 category ( stock ), the VDJ 200 TOYOTA of polands Pawel MOLGO is still unbeatable, winning again today even though he nearly crashed before crossing the line. Behind him follows Marc AIVAZIAN and his KDJ 120 TOYOTA signing a very nice performance, even if he had few problems at the beginning of the race. Marat ABYKAYEV and his NISSAN Patrol completes today’s podium. In the general standings, MOLGO has over 2 hours advance on JUCHAULT and his KDJ 120.

Big problems happened today in the trucks category, as two of the top machines did not finish today’s stage. Indeed, Elisabete JACINTO partly broke the suspensions of her MAN Truck whereas Miklos KOVACS gearbox broke down. It is now obvious that if they decide to continue the Africa Eco Race, it will only be for fun. On the other hand, once more, Anton SHIBALOV animated today’s stage on his monsterous KAMAZ as he finishes 4th in the scratch, only 11’15’’ behind ZAPLETAL’s car.

The second truck of the day is Tomas TOMECEK and his TATRA truck finishing 9th at 43’28’’. The Czech finishes in front of Gregoor BOUWENS at the wheel of his IVECO and the other KAMAZ ( gas powered ) driven by Sergey KUPRIANOV only 4th because of a puncture. In the general rankings, SHIBALOV is 1st in front of TOMECEK and his TATRA at 49 minutes and KUPRIANOV third at 1H30.

Tomorrow, the last Moroccan will take the participants of the Africa Eco Race in the suburbs of Laayoune. The stage will be 225km long before a very long liaison of 532km on the shore of the Atlantic Ocean to reach Dakhla, where they’ll find a beautiful bivouac for the resting day of Sunday. 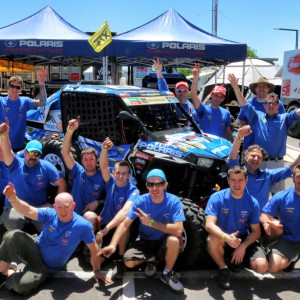 Technical and administrative checks at Tecnopolis Park in Buenos Aires An air of spring with nice a light breeze can be felt...
Copyright 2011-2016 Rallyraid.net - RISE Network. All Right Reserved.
Back to top