Red Bull KTM’s Marc Coma finished sixth in the Dakar Rally Stage 11 and now goes into the penultimate stage of the 2015 edition with a five minute 12 lead over Paolo Goncalves. KTM rookie Toby Price of Australia on Thursday moved into potential podium territory and is now third overall. 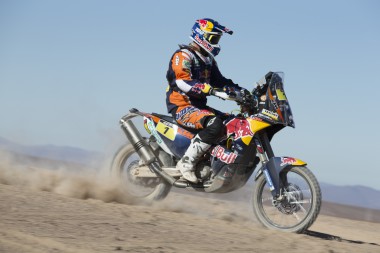 Coma, the consummate tactician and a four-times Dakar winner has said in the past that it is only where you are in the rankings on the final day that count, was satisfied after the second stage of the second marathon session of this year’s rally. With the finish line in Buenos Aires now looming large on Saturday and riders and teams worn down from the rigors of a very hard edition, riders tackled a total of 512 km, of which 351 km were timed special on the way to Termas Rio Honda.

Marc Coma: “We come from a marathon stage that is always more stressful and always with mechanical work. Our time is good but we still have a difficult day tomorrow and also the last day. I am still not able to see the end to this rally but I am happy with how things are going so far. If you look at how far we have already come, it is an eternity. So far we can say we are still very happy.”

Price, of Australia moved into third overall for the first time and now has a marginal time advantage over KTM rider Pablo Quintanilla of Chile. He stands a fair chance of a podium finish in his first Dakar, provided he manages to hold onto the advantage over two more stages. Quintanilla has also been having an excellent Dakar and will not want to give up on going for the minor podium place.

Toby Price: “Two days is still a long way to go. We’re just trying to do the best we can, stay fit and healthy, keep the bike in good shape and that’s been my plan the whole way. Today was not so bad. It wasn’t extremely fast but you couldn’t afford to run wide on turns. It was just a good clean day.” Price, new to this type of navigation and the road book said this aspect had also started to come together for him over the past couple of days.

KTM riders delivered a solid result in the stage with Ivan Jakes of Slovakia, Red Bull KTM factory rider Ruben Faria of Portugal, Price, Coma and Quintanilla finishing the stage in places 3-7. At the end of the stage there were also seven KTM riders in the top 10 overall positions.

KTM Factory Team Manager Alex Doringer said conditions had been very tough for the entire team who had endured temperatures up to 45 degrees Celsius on Thursday as well as dust storms and even flooding in past days.

“We are in good shape,” Doringer said. “Marc is happy and smiling ahead of tomorrow’s stage and no one believed that we would see Toby up here fighting for third place on his first time out at the Dakar.” Doringer said the team was in a strong position for Friday’s stage with Faria,  Price and Coma starting at places four, five and six.

On Friday riders travel from Termas Rio Honda to Rosario, another 1024 km with 298 km of timed special. Teams would be permitted to transport the bikes for part of the long liaison section, Doringer said.Stage Eleven Dakar 2015 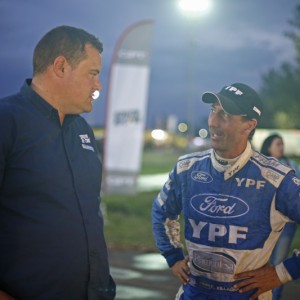 Federico Villagra and Andrés Memi are now within two days of achieving their original target of bringing the YPC Competicion...
Copyright 2011-2016 Rallyraid.net - RISE Network. All Right Reserved.
Back to top