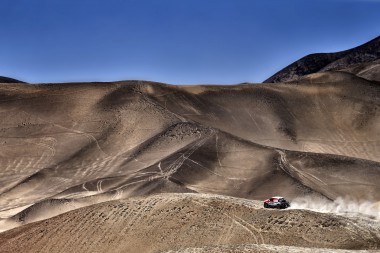 As if the Dakar Rally isn’t tough enough, the crews had to go off into Bolivia on their own for Stage 7 – without the support of their service crews at the end of the day. For Giniel de Villiers and Dirk von Zitzewitz, in the Toyota Imperial Hilux, however, it was a fantastic stage that saw the crew post the sixth-fastest time on the stage, and taking three minutes out of rally leader Nasser Al-Attiyah (MINI) in the process.

The stage was run between the towns of Iquique on Chile’s northern coast and Uyuni on the salt flats of Bolivia. Comprised of 321 km of frantic racing starting at an altitude of 3,600 m, before ending on the Salar de Uyuni at more then 4,000 m, Stage 7 forced the crews to race without the benefit of a full-scale bivouac at the end. Instead each race crew was responsible for servicing and repairing their own race vehicle, in one of the long-standing traditions of the Dakar.

“What a great day for us,” said De Villiers from the small bivouac at Uyuni. “Not only did we keep the pressure on Nasser, but we also managed to take some time from him. We just need to keep going the way we’ve been going, and push when we can push. There’s still a lot of racing to come, so who knows how this will play out.” 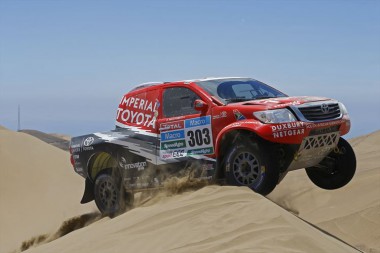 Al-Attiyah made a mistake early on the stage, letting the Toyota crew past in the process. This meant that De Villiers/Von Zitzewitz had to open the road, making navigation tricky. However, the pair again commented on the reliability of their Toyota Imperial Hilux, which ran faultlessley on the mentally testing marathon stage.

“We really had no issues on the ascent to Uyuni, and while we were worried about the thin air at altitude, where our normally aspirated V8 engine is at a disadvantage, we managed to close the gap to the leader slightly, and all credit goes to our race vehicle.”

In the meantime, Leeroy Poulter and Rob Howie in the second Toyota Imperial Hilux, posted the 11th-fastest time on the stage, and moved up to 17th overall. A great performance that should have seen them back in the top starting positions for Stage 8. Unfortunately for them the next stage is run as a continuation of Stage 7, without the benefit of a reshuffle before the start. As such they will be forced to start in the 40th position yet again, after their tough day on Stage 6.

“Those first checkpoints just flew by for us,” said Poulter after the stage. “We did really well to go so fast in the beginning, but then lost a bit of time to the leaders. The Hilux did everything we expected of it and more, and we are in a good position for Stage 8.”

Next up is a return from the high altitudes of Uyuni back down to Iquique, ending with a descent of the now famous dune behind the bivouac.

“We are looking forward to coming back down to lower altitudes,” said Team Principal Glyn Hall after hearing of the safe arrival of the two Toyota Imperial Hiluxes in Uyuni. “The crew here in the bivouac is standing by to give the race vehicles some tender loving care after the marathon stage, and if both crews can just keep doing what they did today, we’ll be in a great position come the rest day.”

Stage 8 will see the crews start on the salt flats near Uyuni in Boliva, before descending back to the Chilean coast. The route is 500 km in length, and will see the teams race down the massive dune for which Iquique has become famous. Next up is the rest day, which traditionally marks the mid-point of the Dakar – but more importantly it marks a return to lower altitudes for the Toyota Imperial SA Dakar Team, which are more suitable to the normally aspirated V8 engine used in the Toyota Imperial Hilux. 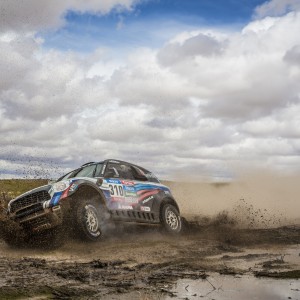 No direct help from the outside, no mechanics, no teams. Tonight in Bolivia, the Dakar competitors are completely on their...
Copyright 2011-2016 Rallyraid.net - RISE Network. All Right Reserved.
Back to top