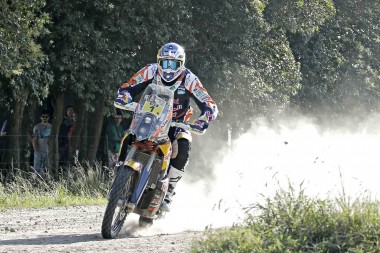 As Red Bull KTM factory riders and supported riders prepare for the second half of the 2015 Dakar Rally they can look back on a first week of highs and lows. The always-consistent performance of the team’s veteran Marc Coma has been contrasted by both flashes of brilliance and some disappointments, especially from KTM’s next generation of rally specialists.

Coma, a Red Bull athlete wraps up his week with one stage victory to his credit and is currently second overall to Spanish rival Joan Barreda. The two riders have stamped this edition as one that is a personal battle of wits, tactics and performance and could take it all the way to the finish in Buenos Aires at the end of next week.

Coma is 12 minutes 27 behind Barreda and given the fact that he lost 12 minutes 32 due to tire problems in Stage Two, this is a fair indication that they are more than evenly matched. The four-times winner is well aware that Dakar fortunes can change in a flash and is confident heading into the second week. He said the first half had been physically and mentally demanding and the rest day was necessary not only to take care of his KTM 450 RALLY but to recoup ahead of what will surely be a very tough second week.

Marc Coma: “I’m happy the way the rally is going. Of course we did lose some time in the second stage but this is how it is. If we ask the other riders all of them would say that they had some problems. We have now finished one week and everything is possible. I would have liked to be the leader by some minutes but in the end, it is the position on the final day that counts. Now we keep going and we focus.”

The team will remember the first week not only because of Coma’s determined fight with Barreda but also for flashes of brilliance from its younger team members and supported riders making their Dakar debuts.

The week started impressively for the KTM Factory Team’s new signing Sam Sunderland of Britain who took the first stage victory. Sunderland has raced the Dakar before but this is his first Dakar ride with KTM since signing with the team at the beginning of 2014. Sunderland’s moment of glory was short lived because he made a navigation error in Stage Two at the end of what was the longest stage of the rally and finished back in the field. He then crashed at the 59 km mark in Stage Four and had to retire from the race, fortunately with only minor ligament injuries.

But while Sunderland’s star had dimmed, newcomer Matthias Walker, the first Austrian to ride the Dakar since the legendary Heinz Kinigadner was beginning to shine. The former MX3 World Champion quickly proved that he was fast and determined, picking up eighth and sixth place in the first two stages then claiming a win in Stage Three. Walkner continued to look impressive until Stage Six when technical difficulties saw him struggle at the back of the field and make a monumental and heroic effort to limp home with a time deficit of 3 hours 43.21 to a richly deserved rest day. Walkner’s day of attrition was a hard lesson on the realities of the Dakar Rally and he now has to recover his exciting form shown earlier in the week and tackle the rest of the stages. He is currently thirty-third in the overall rankings.

Meanwhile Australia’s desert racer, Toby Price has also had an impressive first week and only narrowly missed victory in Stage Six by just one minute 10 seconds. Price has registered 11-8-4-16-10-2 in the six stages so far held and believes he has finally got a handle on navigation. “The first week had its share of ups and downs but I’m enjoying the Dakar and already looking forward to next week and to next year. First I have to finish this one but it’s been a good trip so far. Fitness-wise I’m really good. My shoulders and wrist are a bit sore from all the choppy square edged bumps but once you take off you forget about that. I have to keep my mind on the job, stay in one piece and not have any more crashes.” Price is currently overall fifth.

Seventh overall is Red Bull KTM’s Ruben Faria, who has toughed it out this week still hampered by the effects of a broken collarbone and wrist injury just six weeks ago that curtailed his Dakar preparation. Faria said he was confident that he could recuperate on the rest day and would go on the attack in the second week.

Teammate Jordi Viladoms, who finished second overall to Coma in the 2014 edition had a deeply disappointing day in Stage Six, missing a way point, finishing back in the field and incurring a 40 minute penalty. This dropped him down to seventeenth overall and the Spanish factory rider will be doing his best to put the experience behind him and advance up the rankings in the second week. 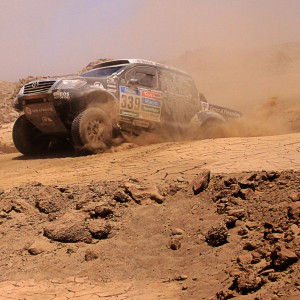 Yesterday we were a bit late to the stage so today someone had the bright idea to leave early. Really early. At stupid...
Copyright 2011-2016 Rallyraid.net - RISE Network. All Right Reserved.
Back to top