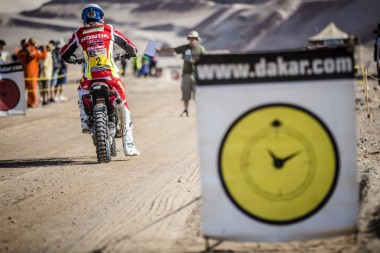 The Rally Dakar finishes the first week of competition with the Hondas of Team HRC firmly entrenched in leading positions. Barreda and the CRF450 RALLY occupy top-spot.

Team HRC arrives at Iquique for the rest-day in cracking form with no less than three Honda CRF450 RALLY riders in the top six positions. Joan Barreda, victor in the second and fourth stages of this Rally Dakar 2015, has commanded from the front since day two. Likewise, Paulo Goncalves, third in the overall rankings, looks poised to strike, as the preparations for the final stretch of the great challenge get underway.

The two stage triumphs of Joan Barreda, bring his total Dakar tally to twelve, and team-mate Helder Rodrigues, who took the honours in stage six and leapt up the overall leaderboard, will be hungry to trim down the gap with his Honda buddies.

It’s also been a highly-successful week for Laia Sanz too, who picked up her best finish in stage four, with an 8th place, and now holds 14th in the general standings. Jeremias Israel, was a little unfortunate yesterday, collecting a hefty forty minute penalty for missing a waypoint, which sees the Chilean drop down to 16th.

Honda South America Rally Team, also remains on course to complete mission objectives, with four of their five riders still in the fray. Daniel Gouet and Javier Pizzolito are both showing their maturity and consistency as the race embarks on its decisive phase.

The following days will be key to how the race plays out. Tomorrow begins the first two-day marathon stage: Iquique-Uyuni-Iquique (January 11th and 12th), the second being held on the 14th and 15th on the Calama-Cachi-Termas de Rio Hondo route.

Terranova among cars and Loprais among trucks shines 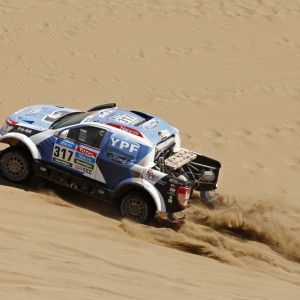 The YPF Competicion Ford Ranger pairing of Federico Villagra and Andrés Memi found a safe and sensible pace and rhythm on the seventh...
Copyright 2011-2016 Rallyraid.net - RISE Network. All Right Reserved.
Back to top