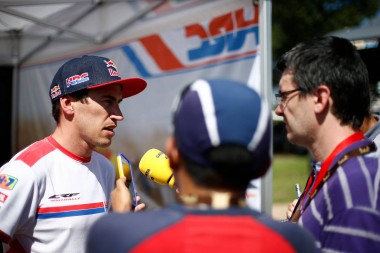 Joan Barreda accomplishes the mission of fending off challengers in the fifth stage of the Rally Dakar 2015. The Spaniard aboard the Honda CRF450 RALLY keeps his distance from his closest rival, as fellow Team HRC members also remain among the front-runners.

The caravan continued to snake its way across the South American continent, leaving Copiapó behind, with destination Antofagasta on the Pacific coast, as a hazardous, rapid-paced stage full of broken up track and fesh-fesh, sped its way across the Atacama desert.

It was Joan Barreda, as yesterday’s stage winner, who set off from the front this morning with a clear objective of consolidating his overall lead and minimizing risks. He was eventually reached by Marc Coma, as the two continued their now habitual duel, finishing the stage together.
Team HRC riders Paulo Gonçalves, Hélder Rodrigues and Jeremías Israel all experienced various types of setbacks over the 458 km distance today, but were nevertheless all able to improve on their overall standings.

The day’s fourth position for Paulo helps solidify his third overall spot, with both Hélder and Jeremías finishing tucked in behind this year’s world championship runner-up.

A prudent Laia Sanz continues to keep up recent form, finishing 21st on the day, and retaking 17th on the overall leaderboard.
The three Honda South America Rally Team riders, Javier Pizzolito, Daniel Gouet and Jean Azevedo, likewise, put in consistent performances among the front-runners. The Argentine rider was once again the best of the bunch, reliably up in the first fifteen of the stage, and 13th overall. In the general standings Gouet lies highest in 21st. 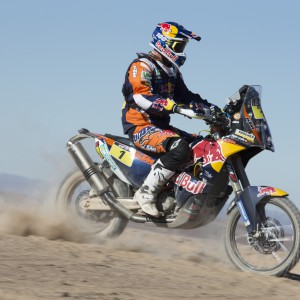 Red Bull KTM’s Marc Coma went on the attack on Thursday and picked up his first stage victory of the 2015 Dakar Rally....
Copyright 2011-2016 Rallyraid.net - RISE Network. All Right Reserved.
Back to top