As a kid in the 80s I used to love the Group B Peugeot 205 T16s and when they got banned by FIA it was the Duke video of Ari Vatanen crashing on the 1987 Paris-Dakar prologue and the following drive from last to first that I used to watch. That was 28 years ago. I have wanted to do the Dakar since then.

But you don’t just do the Dakar. With limited financial means and intellect it took a very long time to get here, but now, thanks to Benediktas Vanagas, with both me and the Peugeots a generation older I get to see the lions roar out in the open at last. 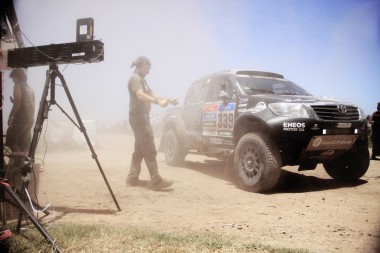 It was an early start (but I think every day’s story will start like that) and Benediktas was nervous as he got suited up… and after reading the book with all the horrific stage information, who wouldn’t be. “But once I get to the start and going everything will be fine,” he said as headed off to collect the Overdrive Hi-Lux from Parc Ferme.

Crowds of screaming and waving locals lined the road out of Buenos Aires Gumball 3000 style, holding out Argentinean flags to give the rally a festival atmosphere. The landscape north west of the capital is flat and the hot summer sun has baked the ground bone dry… and the dust was the story of the day.

After so long watching on TV, seeing the cars come into the finish control and watching the sweat-soaked drivers climb out it was a little like a dream come true, and I think Qatar’s Nasser Al-Attiyah might have been feeling the same sentiment as he was the first man through the finish. With the press of cameramen and the sound of the MINIs engine whining like a big angry vacuum cleaner I couldn’t hear what he was saying apart from the words, “…parked on the side of the track.” That was a reference to Nani Roma, last year’s winner stopped before he even got to the first control point.

Because no one stopped me I’d wondered into the filmcrew only section so didn’t want to join the jostle but Robby Gordon had a few moments for the crowd and said that he had a great day and the provisional 3rd place was right where he wanted to be.

A little out of the top ten and the official camera crews went back to the helicopters and I got to talk to Leeroy Pouter, Giles de Villier’s team mate. “It was so dangerous,” he said. “There was dust through the whole stage and we were just lucky that we didn’t hit anyone. Actually we hit a tree… It was not a good day.”

Coming in behind him and reeling off a great first day in the office was Mark Powell sitting in with Marek Dabrowski. He looked a little shell shocked but gave the thumbs up. 15th was a very good result.

A few spots behind in a similar Hi-Lux, but one with a giant kangaroo painted on the side was Australia’s Geoff Olholm. Unlike most of the others he was all smiles as he got out. “That was like a road race, just flat out and fun all day. We were behind Romain Dumas but just couldn’t get close enough to get by and then in the fast stuff he just pulled away. But today was good!”

With his Wilderness Lighting spot lights cutting through the hanging dust Vanagas slewed to a stop at the time control. “That was the most difficult stage of my driving career. I was driving at 170km/h and then hit a wall of dust and was suddenly blind. In places where I could be at 200km/h I was at 70… but this is the Dakar and so that is how it is. Hopefully tomorrow there will be different conditions or at least some wind… If so I will look forward to it.”

Bryan Garvey got through unscathed and smiling. “After all the preparation it was great to finally get out in the car and drive in anger but the thing that really stood out for me today are the Argentinean people lining the way. They make it so much fun! I also have a great team mate in Antonio Hasbun to work with, so we’re looking forward to what is coming!”

Then there was a 500km drive to Cordoba through endless flat fields of soya plants. One of my headphone speakers stopped working so I only had Lamb of God in my left ear but then at last we saw mountains on the horizon until eventually we got to a stunning camp site on the shore of a lake near Cordoba.

6 hours after he broke down still no one knows what happened to Roma, apart from a tiny and overly optimistic press release that says he lost 6 hours to the leaders. Realistically it means that X-Raid now have a fast set of spares for the other cars. Some more bad news for X-Raid is that Al-Attiyah got a 2 minute penalty for speeding in a controlled section. That might be appealed though. That leaves the top MINI as Orlando Terranova with Robby Gordon in 2nd and the new spec South African Toyota of Gilles de Villiers in 3rd.

Last year Carlos Sousa in a Great Wall was the first leader, so short first stages that most drivers drove practically blind is not really an indication of what is to come. Tomorrow is a monster stage, more than 500km of constant surface changes that only the very best will come out on top of. If any of the odd names on the leaderboard are still there tomorrow I will be very impressed. It will be an early start… 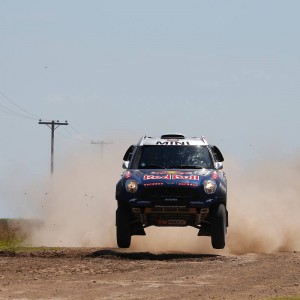 A steady fourth place on a quick first stage where there was more to lose than to win, Joan Barreda got the show on the road...
Copyright 2011-2016 Rallyraid.net - RISE Network. All Right Reserved.
Back to top