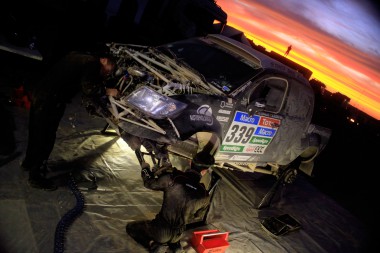 We’re counting backwards now. It’s not Day 11, it’s 4 days to go! …and counting. Last night’s campsite was cold and dusty so I was glad to be in a hotel with the team and we stayed in some kind of eco-pod. I had 7 amazing hours in bed… which in the Dakar means something different to what you would normally think!

Our driver’s attitude to touring bikers on the road is cause for alarm but the most unforgivable thing about him is that the music collection for the car consists of one single CD. And it has not one, but two versions of the Ghostbusters theme on it. Three times a day for 10 days. At 6:30 this morning in the weak Argentinean dawn I had Slayer on my Mp3 player to compensate. ‘Who you gonna call?’ ‘…satan!’

Before today’s 387km stage we crossed the Andes, (It seems incredible that sentences like that have become completely normal.) spending a long time on a high plateau at above 4000m. Being short of oxygen makes me feel like I am panicking and also makes everyone’s bladders ineffective. A bottle of water feels like I’ve drunk a few cans of Stella! 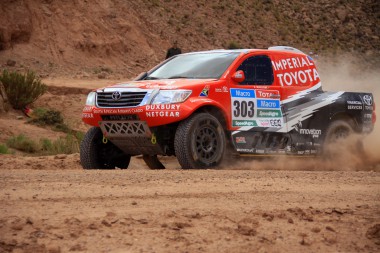 A few kilometres before the start the drivers congregated in a garage forecourt to check tyre pressures, have a coffee, nap and chat. Nasser Al-Attiyah has seemed relaxed all week but now is even more so after the navigation issues rival de Villiers suffered yesterday. “Today all we have to do is stay behind Nani Roma and be careful. But from the beginning I have had a good feeling about this year’s race.”

Guerlain Chicherit was sleeping in his zebra buggy and Benediktas Vanagas, normally chatty and full of energy, said, “I’ll tell you this evening,” when I asked him how he was feeling. The radiator was damaged in the ram-raid accident yesterday, stopping to fill it with water was what caused most of the time loss. But all fired up and nappied was Mark Powell in the 311 who looks a bit more at home in the No 311 Toyota now. Gone is the shell-shocked stare of the first few days! “I am refreshed after the rest day and am raring to go! Yesterday our time didn’t reflect the day we had. Marek Dobrowski was in Dubai for a while testing in the dunes o he is good in the sand and we got the tricky WP that quite a few people had real problems finding. But then we found Christian Laville 20km from the end we towed him back. It cost us a lot of time, but that’s what you do for team mates. Today I am looking forward to a good fast stage through the mountains!” 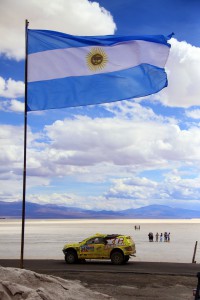 Leading Frenchman Laville is in a career best 6th overall but had a big scare yesterday when he ran out of fuel. He waited 20 minutes stranded until team mates Marek and Mark stopped and towed him to the finish. “Because of the bad time yesterday I start 23rd today so will have some trouble in the dust. What I need to do to keep my position is keep finishing in 8th, 9th or 10th everyday so I can start in the 3 minute intervals. And 6th position isn’t so bad when you consider that I am in the 1st generation Toyota, not a new one.”

The 387km stage started in a riverbed and then wound up through some cliffs on a really fast track. The locals were playing music, making BBQs, waving flags and finding the place that was exactly in front of my shot to stand for their selfies. I was listening for the engine sounds again but I didn’t know that the trucks were starting in with the cars. The Kamaz echoing off the rocks. Magic. 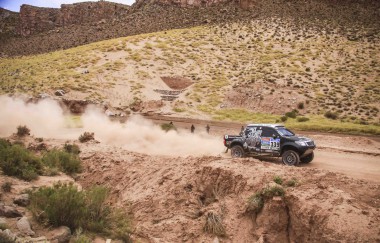 Our guy Benediktas Vanagas started in 45th so that gave a great opportunity to sit and watch the mid-fielders… Bryan Garvey sped past but the one I was waiting for, Stephan Henrad in the VW Buggy didn’t come. Something much have happened to him yesterday. I will find out as soon as I can. There are still plenty of trucks in the event. Watching the queue of them start off, totting airhorns at the locals was another Dakar highlight.

On the road down to Salta we saw the Dakar timekeepers unexpectedly as the cars were neutralised for the road across a big salt flat. We took a few nice photos and then Benediktas came through, much earlier than we expected. Either he was drawing on his inhuman reserves of determination or the painkillers are really working well.

It was a 700km drive today but again the landscape make the miles pass almost un-noticed. At 4700m we went over a pass straight into a blanket of impenetrable fog. My Lithuanian friends don’t have misty mountains where they live and were jumping out to take photos, but for me, it looked just like Wales! The road winding down must have gone around 50 hairpins… and then we found a little oasis, a sweet café in the valley with soft couches on a veranda… and fast wifi! And here we found out that there is a big storm in Salta and the campsite is flooded. Of course ur reaction was to immediately order coffees and beers and make ourselves comfortable.

Some other news we got is that somehow, incredibly, with a broken arm, Benediktas has finished 15th today. We’re all lounging around here listening to the birds in the bushes by the little river with no idea how he managed it. I guess in a while we’ll have to go down to the bivouac and see what is happening, but we are familiar with the Argentinean internet capabilities… so maybe there will be a fuller update later… or maybe not. This is the Dakar! 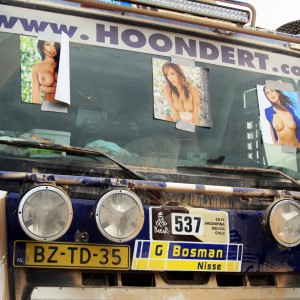 Today was actually one of my favourite days. It’s amazing to be driving through the Andes and standing next to the track...
Copyright 2011-2016 Rallyraid.net - RISE Network. All Right Reserved.
Back to top