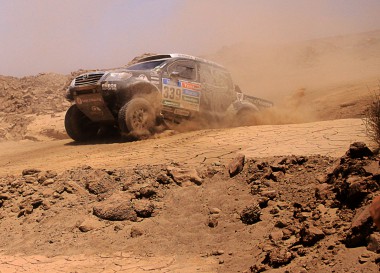 Yesterday we were a bit late to the stage so today someone had the bright idea to leave early. Really early. At stupid o’clock, in fact. So packing our camp beds away at 4:30 am, missing breakfast we had a lovely three hours watching all the bikes and quads come through while keeling over using my computer bag as a pillow. Yes, Robb was grumpy this morning. Here in the Dakar sleep is as valuable a commodity as an internet connection.

After a week, if you include the days of scrutineering, of constant driving, navigating, photo taking and editing and writing the exhaustion manifests in different ways. Benediktas Vanagas, the driver of our team is always bouncing around directing the mechanics or doing interviews and never looking fatigued in the slightest, but for us normal people are starting to suffer. Some personality issues are starting to seep through the cracks of sleep deprivation but for me I am really having issues with short term memory. I am constantly going through my pockets and bags looking for things like pens and batteries I was sure I had a few moments ago and even though I have been trying to remember for a while now, I can’t recall anything of yesterday’s stage… And so I am getting a whole new appreciation of the superhuman levels of fitness and stamina the drivers must have to do what they do, day in day out for a week. 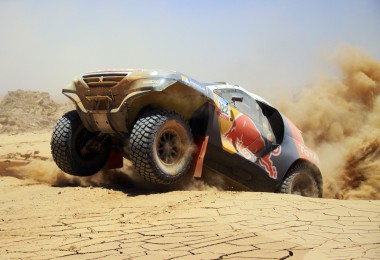 We’re near the tropic of Capricorn… or Gemini… I asked this morning but have already forgotten, but two weeks after the summer solstice the sun is almost directly overhead. The sun is hot but the air is cool as we are about 2400m above sea level, up in the barren wastes of Chile. I had no idea is was such a desolate place. Our place for the day was a giant flood plain with an abandoned railway running across it and a dig ditch. I remembered about what Yazeed Al Rajhi told me a couple of days ago about being scared of ditches so as I watched him tear towards it I couldn’t help waving to slow him down. He just about managed to slew to a stop but had the power on before the front wheels had touched the ground. Gedmus has a nice photo of my in the process of taking cover in a very prickly bush. The Toyota’s sub frame whacked on the top of the other bank but he was away. Fast. 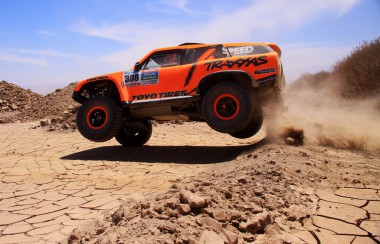 Robby Gordon was next and his Gordini’s suspension made short work of the steep banks but the buggy gets airborne much easier than the 4×4 cars do. Something I learned today is how well a MINI stops. Quite a few of them raced up to the ditch and we were sure they were going to nose in hard but they pulled up, up dirt, in an incredibly short distance.

And then another surprise. Making an unmistakable plume on the horizon was a Kamaz. Standing just a few metres away from the Russian behemoths as it made easy work, grinding and creaking like an old ship was well worth the lungful of dust. Then I saw Marek Dabrawski coming, looking a little hesitant so waved him over and pointed to the line through. Evidently co-driver Mark Powell saw me as he came and thanked me later. “We could see that it was a ditch and it was marked as a triple caution, but we couldn’t see the bottom of it so you never want to drive into something blind like that.”

I saw the VW buggy, going very well, but by the time 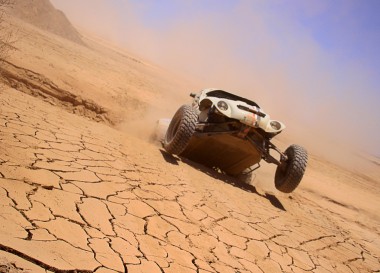 it came through we were well aware of the ominous lack of a black Toyota with a motif of a Lithuanian knight on the side. After finishing 14th yesterday high hopes of a good starting position for the marathon stage were dashed when a rough ditch broke the half shaft, which in turn cut a brake pipe. 3x4s are no good in the fesh fesh so there was no option, they had to stop and fix it in the stage. An hour and a half was lost. Benediktas has a special knack for being positive though. “When you prepare for the Dakar you always hope that nothing will happen… but something always does. I think Robby Gordon knows this even better than me. We dropped form 14th to 24th but we’ll still do the best that we can in each stage, so the plan hasn’t changed at all.”

On paper the day looked like a little short one, 322km liaison, 69 SS, 22 liaison, 186 SS and then 48 down to camp but following the cars to the mid point of the stage, standing for over three hours in the sun, not eating until after 4pm and driving over 700km we got to camp just as the sun was setting over the ocean. Looming up behind is a 1000m high sand dune with a little, barely distinguishable line running down it. I have watched Youtube videos of a certain orange buggy fly down it a few times. 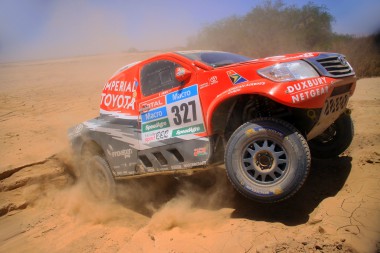 Another thing I learned today is how huge and involved the event is that a chase crew with no internet that gets into camp late in the evening knows next to nothing about what is going on in the overall standings. Yes, we see the cars race past at mad speeds but we only see a snapshot of each stage, a few seconds of action from 4 or 5 hours of fierce competition. For example I only found out this evening that Carlos Sainz rolled out yesterday. And one more thing to learn; internet is a luxury!

This evening I did find out that the kangaroo liveried Toyota of Australian Geoff Olholm will be going no further. Blinded by dust he found a deep ditch and stoved the front of the car in. The damage to the Hi-Lux is easily fixable, but unfortunately that done to Geoff is not. It was a hit hard enough to hurt his back so bad that he temporarily lost feeling to his legs. The latest news is that he has damaged a vertebra but will be fine.

The rest of the results I have no idea about, but seeing the leaderboard on a scrap of paper strewn over the media centre I see that Al-Attiyah in the MINI is managing his lead over Giles de Villiers in the South Africa Imperial Toyota, but just 28 mins behind is the amazing Al-Rajhi. Dakar 2015 is now a three horse race, and even if the Saudi driver took 3rd, on his first ever Dakar that would be an incredible result.

The much talked about marathon stage in neighbouring Bolivia starts tomorrow. A 321km stage that finishes up at 3800m, a camp that is strictly for drivers only and even press aren’t allowed lest someone be a secret mechanic sneaks in… which means that someone might get a day off tomorrow. Crews can use what tools and spares they have, nothing more. The next day there is a 510km SS back down to Iquique, a two day odyssey that will finish with a decent down the famous dune, a 1km drop.

My wonderful team brought me to a hotel in town to use the wifi and seem to have left me here. I am not complaining. Sleep is a luxury! 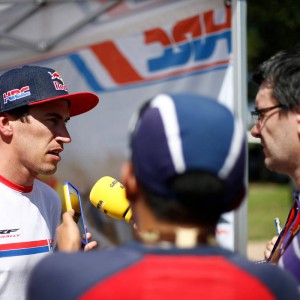 Joan Barreda accomplishes the mission of fending off challengers in the fifth stage of the Rally Dakar 2015. The Spaniard...
Copyright 2011-2016 Rallyraid.net - RISE Network. All Right Reserved.
Back to top