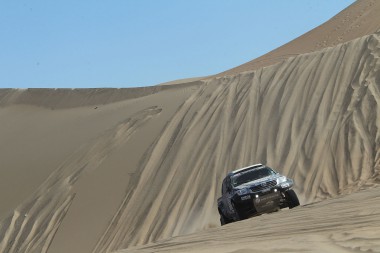 The first shower for three days, a clean set of clothes, a good stretch of arthritic knees and a stroll in Iquequi beach, what a nice way to start a Dakar day. There’s no press on today’s Bolivian marathon stage so all of a sudden we have a day off and nothing to do. Well, the hotel has a pool so I can think of something to do…

As Gedmas and I strolled around the service park we both commented on how nice it is to be relaxed at last. Somewhere in another country 74 cars are battling hell for leather but the organisers have let their local partners and families into camp so there is a festival atmosphere around the hospitality tents, and Belarussian truck mechanics posing for photos with Chilean children. The only action is on the live action screens, although they are very confusing. The camerman Vilius fimed me trying to work out where our driver Benediktas Vanagas was so you might see my left hand and nice Vostock Europe watch (a gift from the team sponsor) on the video tonight. Also very cool to see was the two of us scattering in front of Eric van Loon’s MINI on the big screen in the camp canteen. The people on the tables around us had no idea why we were jumping up excitedly.

I am sure pretty much everyone knows what 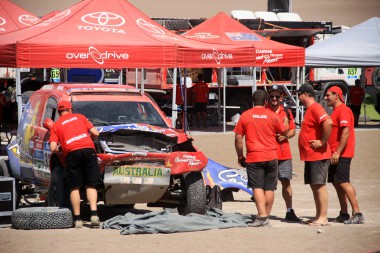 headline driver Robby Gordon has been getting up to but fellow American Bryan Garvey is also still in the rally… although they came close to binning it yesterday. In thick dust while overtaking a truck they hit a ditch hard and had to drag the buggy back to the camp carefully so that they welder could at least try to get it ready for the marathon stage. They did and according the live timing are on course to get a Top 50 finish on the first part of the marathon stage.

Again according to the screens Vanagas got to the remote camp in 15th so moves back up a couple of places in the overall standings and you’ll find him in 22nd, one position and about half an hour ahead of Robby Gordon. 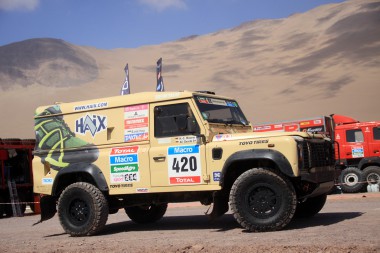 Sadly out are the No 420 Land Rover crew. The most standard car in the field doesn’t have a scratch on it and it didn’t break down, it was the crew that couldn’t carry on. On Stage 5 they were struggling in the dark and dunes until a thick fog came down and they couldn’t see their hands in front of their faces. Then they saw some lights of some trucks in front and tried to follow them… until one fell over. Because it was so dangerous they waited until first light to finish the last 30km and thoroughly exhausted got to camp at 9:30am with less than 2 hours before the start of the next stage. A tired driver can’t react to a hazard too quickly and a tired co-driver can miss something important in the roadbook so they decided that it wasn’t safe to continue. They are proud to have done 5 stages some of which were the hardest in recent Dakar history. 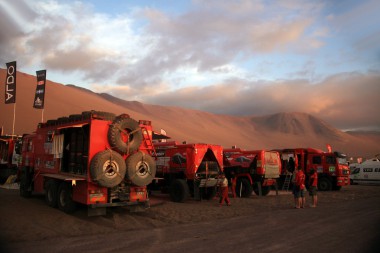 Today’s stage was 321km long and up to an altitude of 3800m so looking at how close the times are it seems amazing that the Top 10 are covered by such close margins. Nasser Al-Attiyah struggled to cope with the altitude with a bad headache and will be very happy to only drop 3mins to his closest challenger Giles de Villiers who is now just 8 mins behind. Dakar rookie Yazeed Al-Rajhi continued to impress in the second Toyota taking 2nd just a couple of minutes behind the fastest MINI. The stage win went to Orlando Terranova who after his first stage malfunction has nothing to do now apart from collect stage wins. I am too frustrated with the getting the live timing to work as it is taking up valuable pool time.

Tonight the crews have to work on their own cars with no outside assistance and then it’s 472km of sand and salt beds back to Iquequi in Chile, ending with the famous drop down the massive dune. Guess where I’ll be standing! 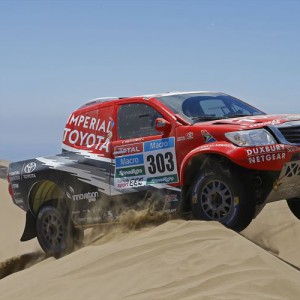 As if the Dakar Rally isn't tough enough, the crews had to go off into Bolivia on their own for Stage 7 - without the support...
Copyright 2011-2016 Rallyraid.net - RISE Network. All Right Reserved.
Back to top