Today was actually one of my favourite days. It’s amazing to be driving through the Andes and standing next to the track watching the Dakar cars pass before you in trails of dust, but I like having the time to wonder around talking to all the people I’ve not had time to catch up with all week.

Next door to us in the Iquequi camp are the Polaris team. When cars and trucks struggle with the terrain you might be forgiven for thinking that attempting the Dakar in something so diminutive that it doesn’t even have a gearbox is just a bit mad. But no, Jes Munk from Denmark has a perfectly plausible plan. “I always rode bikes but two years ago I had a big accident and broke 60 bones in my body and spent 14 days in a coma so a Polaris is the best compromise for me because I just want to come back to the Dakar. But for me to tell you the story of the first half of the rally… I don’t know where to start. I can just say that we are here at the rest day so the first part of the plan is done, now we just need to get to the finish. We are having a great time and have nothing seriously wrong with the Polaris, just a couple of belts and tyres and in Bolivia is was hard because it was so wet and cold and we had altitude sickness. But Americans need to know that this is perfect for a Polaris to race here!”

The Polaris is a pretty spectacular machine. If you haven’t seen this amazing video of one flying Ken Block style, click here https://www.youtube.com/watch?v=jxTvMaJBT3c 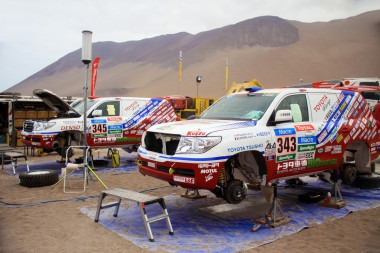 A few pits further on are the Japanese Toyota Bodyshop team and Jun Mitsuhashi was boiling up some noodles next to his T2 production class leading Toyota Land Cruiser. “Yes, we are first in class, but you know that it’s normal for me. Actually I won T2 so many times it’s hard for me to keep motivation. My team mate is a couple of hours behind and we are about 10 hours ahead of the 3rd placed car which is good but it has not been an easy rally. I was ill at the start and the first stage took absolutely everything out of me and I didn’t get better for about 4 days. Then we lost a radiator in SS3 which cost some hours. Also two times we broke the power steering. The first time I was trying to go up a big dune and didn’t see a small wall but we were near the campsite so it didn’t matter too much. The next time was on the marathon stage though, so was very serious. I had to drive 1000km without it. It was hard but we are not fighting for position so at least there was no stress. Now we will go to Buenos Aires!” 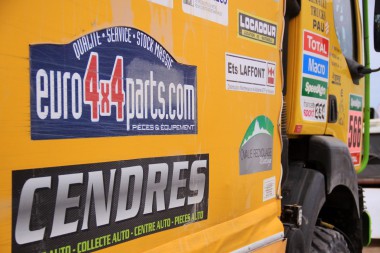 A famous team here in Dakar circles are the Boucou trucks, sporting Euro4x4Parts logos on the sides. Their 5 trucks and 1 T2 car follow behind with parts, a welding service and recovery equipment for 12 cars and a few trucks. One of their guys told me a few of their stories from the last week. “One of the Tatra trucks stopped with a broken turbo so when our guys came there were 6 guys working for 3 hours on it and then they were able to continue. They are very happy with the service because otherwise they would be out of the race now. On another stage two of our client’s cars were stuck in the sand so we tied them both behind the truck and pulled them along together in a train. But then there was a big hole with a guy stuck at the bottom of it. He could move if he wanted to but he was sure that he was going to wait for his help… so the driver said that he is not responsible if the truck goes and falls against the car. The guy said OK, they shook hands and then they went… and you can see the scratch down the side of the other car now. It must have been terrifying for the other guy to watch, but they made it! We also collected some nice bits of Peugeot after Sainz’s crash. We have a big workshop in France and over the years we have collected quite a few souvenirs like this.”

On my way to get some lunch I met a very calm looking Nasser Al-Attiyah and asked him what he thought of the 8 minutes lead he has over De Villiers. “I am very relaxed. We will drive tomorrow and see where he is but we don’t need to push.” I asked what he thought about 3rd placed Yazeed Al-Rahji pulling back 10 minutes in the last two stages. “I am not worried. Tomorrow he will open the stage so we will see. He has a good co-driver in Timo Gottschalk but we will keep the same strategy, although all the way to the last stage will be hard.” 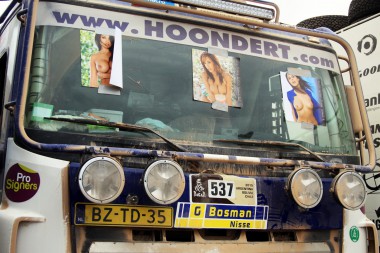 Then I met Mark Powell on his way back from the co-driver’s briefing. “It’s my day off, the last thing I want to be doing is collecting another roadbook!” he smiled. “But the trip to Bolivia was quite spectacular. Racing through the rain, snow, across raging rivers, all the people at the side of the road waving us on, sleeping in the barracks in the same room as the likes of Peterhansel and de Villiers and then banging across the biggest salt flat in the world… it was all incredible. That salt flat was 100km long but it didn’t take us too long to get across it. At one point I was thinking about taking my phone out to send a text home but you can’t really take your eye off the terrain for a moment. Another good thing at the end of the marathon stage is that the Orlen team has mechanics to look after the car, so we can just get out and leave it to them which is great. And I had my best sleep yet on the road section back from Bolivia. My head just fell forwards and I was out until we had to start the next section.”

Mark also gave me an exclusive about the pee stops… or lack of them. “No one talks about it but no one pulls over to stop to pee behind a bush, do they? That’s because everyone has nappies. Seriously! But someone took mine out of the car… Robb,” he said, looking me straight in the eye. “Have you ever pissed yourself? Well, there’s a point where you just don’t care anymore… And now I know what old age is going to be like!”

Over in the far corner of the camp is the blue buggy of Bryan Garvey. They were spending the day getting some hard earned rest in a hotel in Iquequi so I couldn’t get an interview. Their buggy was getting a complete strip-down though, ready for the next 5 days. It was even getting some new bodywork! They are still going, 68th out of a remaining 72 but still going is the key word. But many, many other teams are not! 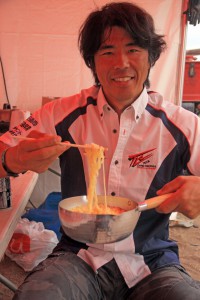 One of those teams on the wrong list, that of withdrawals instead of leaderboard, are the Rally-Raid.co.uk team who started with 4 cars and are now completely wiped out. In the shade and breeze in the back of the service truck I spoke with Chris Ratter about what had happened, “One team had a grand total of 7 punctures on Stage 2 and we just didn’t have enough time to get 4 new tyres into them before they got a DNF. The Bolivian crew had a roll, the car is good to continue but they were a bit shaken and headed home, the British and Swedish pair lost a transfer box and an Australian team we were looking after blew a turbo on their Izuzu D-Max… but this is the Dakar and this year it is a seriously tough one.”

Last, but by no means least is France’s new hero, Benediktas Vanagas. His whole left forearm is noticeably swollen and wrist discoloured and the x-ray showed a clear fracture at the joint on the radius bone. “It’s good that it is the day off because I can talk to the medics and can test the dosage of the painkillers so that for tomorrow we can get the right balance of medicine.” At least the car is already fixed… but For Benediktas I can’t imagine the level of determination that will see him do tomorrow’s huge 450km stage. 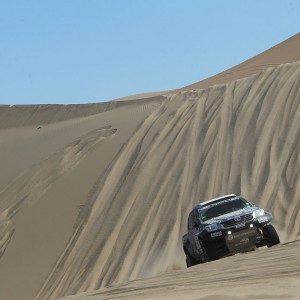 The first shower for three days, a clean set of clothes, a good stretch of arthritic knees and a stroll in Iquequi beach,...
Copyright 2011-2016 Rallyraid.net - RISE Network. All Right Reserved.
Back to top