Threepeat by Vildosola Racing in the San Felipe 250 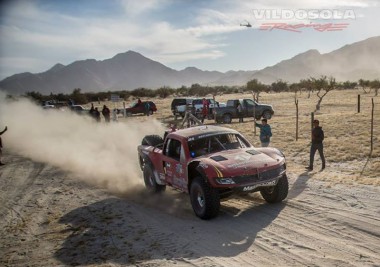 With a race time of 4:03:41, Vildosola Racing enters the SCORE International record books by winning one of the races with the toughest terrain for the third year in a row, the San Felipe 250. The record started in 2013, when Gustavo and Tavo Vildósola along with Javi Valenzuela started a winning streak that seems unstoppable. With this victory Vildosola Racing sets a new record of the only team to win the San Felipe 250 four times, three being back to back wins in 2013, 2014 and 2015,

Starting in the 13th position out of 20 Trophy Trucks from Mexico and the U.S., Trophy Truck #21 proved once again that this is it’s track maintaining a 63.77mph average. The team had a clean race that allowed them to have the best elapsed time possible and maintain leadership on corrected time.

The whole team, lead by Gustavo Vildósola, had an excellent logistic plan, executed by chase trucks and pit crews which lead to this historical victory.

The 2015 series starts off on the right foot for Vildosola, and it’s expected to continue through the entire SCORE International Championship. Setting sights on the opportunity to have the #1 plate on the truck next year. The team is very united and as strong as ever, looking forward to representing Mexico once again in the world of Off Road. 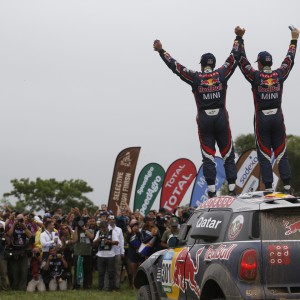 With the slippery surface on the stage yesterday there was a lot of panel damage and several piles of discarded doors...
Copyright 2011-2016 Rallyraid.net - RISE Network. All Right Reserved.
Back to top