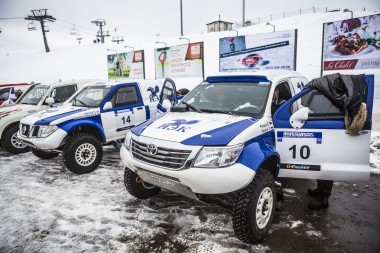 The team plans to participate in all rounds of the national cross-country championship and get prepared for the international races such as Dakar 2016.

After a successful performance in Dakar 2015, the crew Evgeny Firsov / Vadim Filatov are looking forward to the start of the baja where they are going to race in a T1 Nissan Datsun, the car familiar to the crew from the season 2012 and the baja Northern Forest 2013. The Toyota Hilux Overdrive, the crew’s Dakar racing car now being delivered from Latin America and not being on time for preparations for Northern Forest.

Dmitry Ievlev and Aleksey Shaposhnikov are racing in their regular T1 Nissan Navarra with an upgraded engine.

The crews commented on the relocation of the race to Karelia.

Evgeny Firsov: The relocation of the baja to Karelia means that the race is going to be two times more interesting and three times more spectacular. Leningrad region is beautiful too, yet it is no rival to Karelia. I am quite sure that the stunning Karelian routes and their 3D relief will give the competitors much more pleasure than narrow forest sections and bumps and mounds of the previous location. We have a classic rally experience in the region where the baja is going to be organized, so we have the notion of what to expect from the routes. As our Toyota is not going to be delivered on time after Dakar, we are participating with our previous T1 Nissan Navarra. We have two of those highly competitive cars in the team. The other car will be driven by Dmitry Ievlev. Our car is light, powerful, and fast, not as powerful as Toyota Hilux perhaps, but driving it has always been a pleasure and helped achieve ample results.

Dmitry Ievlev: We were satisfied with our ranking in the Northern Forest last year, and this time we are planning to better them. The new location is advantageous for me, these routes levels the chances and make the competition more exciting. I like cross-country racing on all surfaces, and until recent years snow was not the most auspicious for me, but even in 2014 the steering went much better, the learning goes well!

How do you prepare for the race?

Evgeny Firsov: The race is going to be rally-type, slippery and fast, and I would like to have a couple days’ training on snow before going to Karelia. We are now considering various opportunities, though they are not numerous. The first option is to find an icy surface – a frozen lake or a pond, a cleared river section, or a track covered in water filled and frozen. But at the moment all tracks are melting and we are not allowed to any of them. I hope that the upcoming frosts will allow us have at least a couple of days on an icy track. The second option is to test ourselves in Peno. Maksim Kirpilev and Vladimir Vasilyev have already registered for it to be fully prepared for the baja Northern Forest. But our work schedule is pretty busy for the moment, and we will most likely only have a day’s test drive. Even that is better than nothing. While the head knows what to do, we must train the body to steer on the slippery ice because if we are going to get accustomed for the ice during the race, other competitors will be racing towards their victory.

Vadim Filatov: After Dakar with its fesh-fesh, altitudes and other intricacies, the home race with tall pine trees and birch trees along the way and snow covered plunked roadways will be like honey to our hearts. 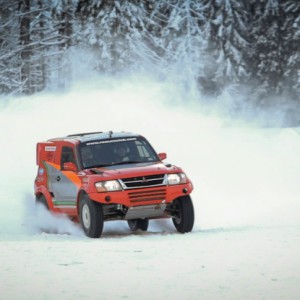 Tapio Suominen started as a racer in 1999 and for a long time was a co-driver to Toni Gardemeister in classic rally. In 2007,...
Copyright 2011-2016 Rallyraid.net - RISE Network. All Right Reserved.
Back to top