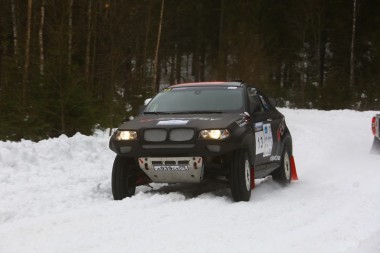 Baja Russia – Northern Forest organisers moved the race further to the north in order to be able to provide perfect winter conditions with nice snowy tracks for the teams – but it seems like the gods of weather simply doesn’t want to help them at all. Although some days ago the weather was really cold with about minus 10 degrees or lower and there is still a lot of snow from the previous snowfalls, by now the temperature is almost the same as last year when the race was held in Igora: around zero, maybe even above that. Which means, instead of nice thick snow the teams encountered some soft, watery mass, that became damaged already after the opening car.

Under these really not easy conditions the 9.5 km long prologue ended with surprise win of Andrey Zhigunov (NT X6). For Zhigunov this is only the third appearance in cross-country rallies but the slightly rally-like track proved to be favourable for the multiple Russian rally champion, who finished in front of Finland’s Tapio Suominen (Overdrive Toyota) and Russia’s Vladimir Vasilyev (Mini). Zhigunov, starting eighth, already experienced deep ruts in the soft snow. „ It was slippery, difficult and dangerous. I really don’t envy those starting behind me,” Zhigunov said.

One of the fastest last year, Tapio Suominen switched to Overdrive Toyota for the 2015 edition of Northern Forest Baja. His first encounter with the car can be considered as a success as he was only five seconds slower than Zhigunov and found the Hilux very enjoyable to drive. 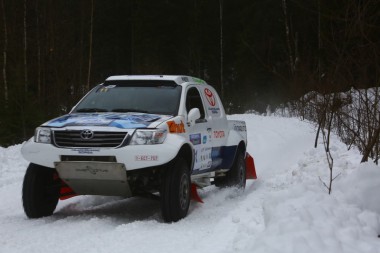 Marek Dabrowski (Overdrive Toyota) started cautiously, maybe too cautiosly as he reported after the finish, but the Polish ex-biker was still more or less happy with his 4th place. Mini’s Erik Van Loon had problems with the grip, or better to say, the lack of it, finally finished 6th behind Evgeny Firsov from Russia’s PEC Team.

Czech Miroslav Zapletal clocked the 7th time, followed by Kazakhstan’s Andrey Cherednikov, driving the former G-Force Proto of Bogdan Novitsky for the second time after an experience years ago so the prologue he devoted to learning the most about the car.

Big loser of the day was last year’s bronze medallist Reinaldo Varela, who spun just before the finish and stopped in the snow wall in the opposite direction, so after he managed to restart and get out the car he also had to find a place where he were able to turn and finish the prologue. Altogether he lost a good 30-40 seconds, landing just outside the top 10.

At the briefing held in the evening the ten best crews had the opportunity to choose their starting positions, according to the regulations of the World Cup. Because of the condition of the track, everyone wanted to start first, so for a long time it seemed like the starting order will actually be the sam as the result list of the prologue. Up until the last one to choose, Andrey Zhigunov, who opted for the 3rd position.

Tomorrow one single special stage of 158 km is on the menu, and on Sunday the teams run on the same track in the opposite direction. 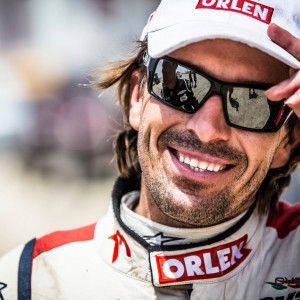 The polish driver Marek Dabrowski started his racing career as a rider back in 1989. Having finished in his first Dakar marathon...
Copyright 2011-2016 Rallyraid.net - RISE Network. All Right Reserved.
Back to top